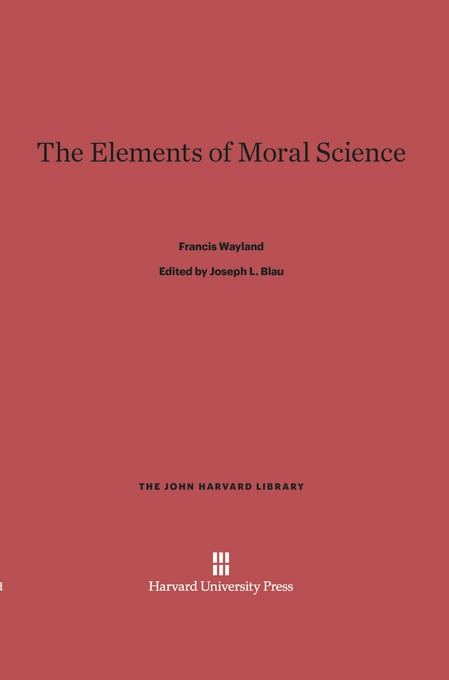 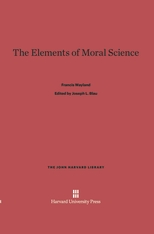 The Elements of Moral Science

Francis Wayland’s The Elements of Moral Science, first published in 1835, was one of the most widely used and influential American textbooks of the nineteenth century. Direct and simple in its presentation, the book was more a didactic manual than a philosophic discussion of ethical problems. But because of its success, and because it set the tone and form for so much educational writing that was to follow, this first important American textbook in moral philosophy is now of great value as a document in the history of education.

The book grew naturally out of the lectures Wayland prepared for the senior course in moral philosophy he taught as President of Brown University beginning in 1827. Courses of this kind were common at the time. As an undergraduate at Union College, Wayland himself had taken one under President Eliphalet Nott, who was to become his lifelong supporter. Loosely organized, such courses gave the college president, most often interested in the training of character rather than in learning for its own sake, an opportunity to impress his personality and moral views on the seniors before turning them out in the world. Wayland’s course at Brown, less rambling than many, was described by a former student as “one garden spot in the waste of the curriculum.”

In his lectures and, finally, in his book, Wayland stood in opposition to the utilitarian ethics of the eighteenth century which based moral judgments on the consequences of men’s acts. He held instead that conscience was a faculty directing man’s actions in accordance with moral law. Wayland developed this idea in the first part of his book, called “Theoretical Ethics.” In the second part, “Practical Ethics,” he established three working principles: the eternal validity of moral law as revealed in the Scriptures, the right of private judgment in accordance with Protestant tradition, and the Jeffersonian republican limitation of the powers of government. These he then applied to moral practice, vindicating and validating the desirable virtues of justice, veracity, chastity, and benevolence.

One section of Wayland’s otherwise inoffensive text turned out to be highly controversial. Under the heading “Personal Liberty” he discussed the question of slavery, coming at length to the conclusion that the duty of masters to slaves was to free them, while the duty of slaves to masters was to obey them and be faithful to them. In the climate of that time, his recommendation to leave action to the Christian conscience of the individual master was no more acceptable to the growing abolitionist sentiment of the North than to the defensive, proslavery feeling of the South. The Elements of Moral Science went on, nevertheless, to a long and popular life, going through several revisions (in which the slavery section was progressively altered) as well as translations, and selling 100,000 copies by the end of the century.

Francis Wayland (1796-1865) stands as a central figure in the first great movement for reform of education in the United States. Ordained first as a minister, he served as President of Brown from 1827 to 1855, advocating a wider, more liberal, more practical curriculum at a time when courses of study were still tightly bound to the classics. In politics anti-expansionist, and a pacifist by conviction, he bitterly opposed the Mexican War and the admission of Texas. His opposition to slavery gradually increased until, on the outbreak of the Civil War, he could write, “Can it be doubted on which side God will declare himself?... The best place to meet a difficulty is just where God puts it. If we dodge it, it will come in a worse place...”

This text reproduces the 1837 revision of The Elements of Moral Science. Minor variations from other editions are included as footnotes. Variant versions of longer passages are carried in full in appendices.