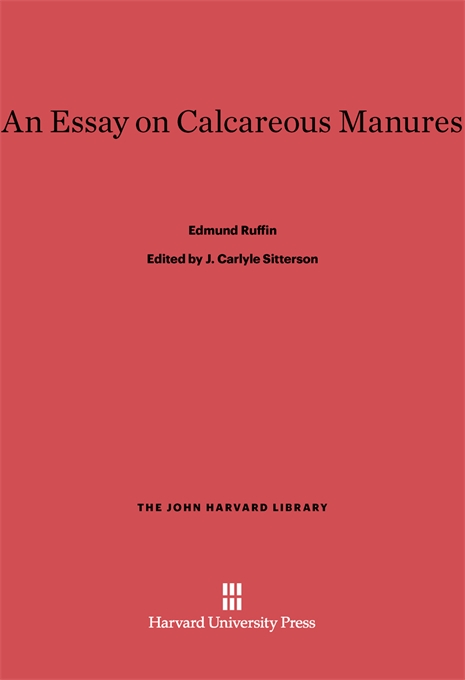 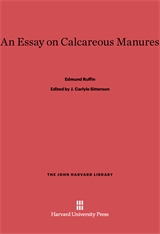 An Essay on Calcareous Manures

The publication in 1832 of An Essay on Calcareous Manures initiated an era of agricultural reform in the ante-bellum South. By 1850 Edmund Ruffin, seconded by John Taylor of Carolina, had effected a transformation of the economy of the upper South from poverty to agricultural prosperity. The essay’s importance is not only regional, for in its four editions it presented Ruffin’s theories to farmers who were facing the same problems of soil exhaustion in other parts of America. This small book, with its uncompromisingly descriptive title, is a landmark in the history of soil chemistry in the United States.

Ruffin read widely in the literature, mainly European, of agricultural chemistry, and in the 1820’s he experimented with ways to make planting pay on his own tidewater Virginia lands. On the basis of his own research and frustrating experience as a farmer, he maintained that the capacity, of soil for enrichment by plant and animal manure is only relative to the original fertility of the soil. In other words, organic manures can only restore earth to what it was prior to cultivation. If land originally lacked the mineral ingredients essential to fertility, it would yield sparingly as long as the minerals were absent.

Ruffin found that uncultivated land in his part of Virginia lacked calcium carbonate, and that most of this same poor soil contained vegetable acid, the cause of its sterility. His solution was to plow in calcareous manure that is, earth containing calcium carbonate thus neutralizing the acid. When Ruffin first had his slaves dig up marl from one of the beds of fossilized shells that underlie much of coastal Virginia, and directed them to apply it to a test patch of his land, which was then planted with corn, he increased his yield by 40 per cent. This amazingly successful experiment led to others, and became what a contemporary of Ruffin called “the first systematic attempt wherein a plain, practical, unpretending farmer…has undertaken to examine into the real composition of the soils which he possesses and has to cultivate.”