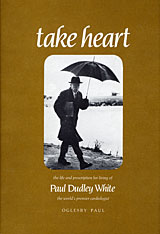 The Life and Prescription for Living of Dr. Paul Dudley White

Oglesby Paul was Professor of Medicine at Harvard Medical School and a senior physician at Brigham and Women’s Hospital in Boston. A native of Philadelphia, he was a graduate of Harvard College and Harvard Medical School. His three years of service in the U.S. Naval Medical Corps Reserve in World War II were followed by training in cardiology in Boston at Massachusetts General Hospital under the eminent Paul Dudley White. He then pursued an active career of practice, teaching, research, and administration in Chicago, both at Rush-Presbyterian-St. Luke’s Medical Center and at Northwestern Medical School. He lectured and wrote extensively and, among other activities, served as head of the American Heart Association and the Subspecialty Board of Cardiovascular Disease and as chairman of a large long-term study of coronary heart disease supported by the National Institutes of Health.