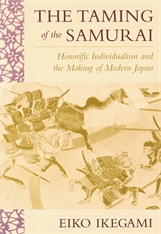 The Taming of the Samurai

Honorific Individualism and the Making of Modern Japan

Modern Japan offers us a view of a highly developed society with its own internal logic. Eiko Ikegami makes this logic accessible to us through a sweeping investigation into the roots of Japanese organizational structures. She accomplishes this by focusing on the diverse roles that the samurai have played in Japanese history. From their rise in ancient Japan, through their dominance as warrior lords in the medieval period, and their subsequent transformation to quasi-bureaucrats at the beginning of the Tokugawa era, the samurai held center stage in Japan until their abolishment after the opening up of Japan in the mid-nineteenth century.

This book demonstrates how Japan’s so-called harmonious collective culture is paradoxically connected with a history of conflict. Ikegami contends that contemporary Japanese culture is based upon two remarkably complementary ingredients, honorable competition and honorable collaboration. The historical roots of this situation can be found in the process of state formation, along very different lines from that seen in Europe at around the same time. The solution that emerged out of the turbulent beginnings of the Tokugawa state was a transformation of the samurai into a hereditary class of vassal-bureaucrats, a solution that would have many unexpected ramifications for subsequent centuries.

Ikegami’s approach, while sociological, draws on anthropological and historical methods to provide an answer to the question of how the Japanese managed to achieve modernity without traveling the route taken by Western countries. The result is a work of enormous depth and sensitivity that will facilitate a better understanding of, and appreciation for, Japanese society.