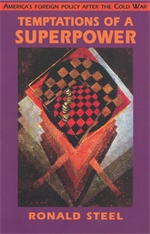 Temptations of a Superpower

“Temptations of a Superpower deserves a wide readership among both foreign policy experts and laymen. [It] is a rare example of clarity, wisdom, and intellectual integrity. It would stand out even in a time when the nation’s chattering classes were able to distinguish argument from invective.”—Alan Tonelson, New York Times Book Review

“Consistency is an admirable intellectual trait, and Mr. Steel’s writings show a disciplined coherence over thirty years… In fact, they are the expression of a distinct sensibility that holds that no matter what the world looks like, a minimalist foreign policy is best for both America and the world. These convictions are heartfelt and expressed with moral clarity.”—Fareed Zakaria, Wall Street Journal

“Ronald Steel has been a brilliant and iconoclastic critic of American policy and American follies for a quarter century—perhaps our most brilliant. This book recapitulates absurdities and excesses of the Cold War now over, summarizing with a certain peremptoriness, and even a certain weariness, things Steel has often said before.”—William Pfaff, World Policy Journal

“Put bluntly, Steel’s message in this nicely crafted series of essays is: Forget most of what you learned during the past half-century. The United States may be the world’s only superpower, but it is far less ‘super’ than before, and the honor may be more trouble than it’s worth… This is a direct and bracing argument, more useful than anything our major politicians have said about foreign policy over the past few years.”—Doyle McManus, Washington Monthly

“This sharp little book offers an important contribution to the current debate on the future of US foreign policy. As is almost de rigueur these days, Temptations of a Superpower opens with a depiction of the US foreign-policy establishment’s disorientation following the end of the Cold War, and the loss of an enemy that now looks ‘more like a deflated blowfish than a whale.’ Given Ronald Steel’s long-standing suspicion of this establishment, including both its commentators and practitioners, this is done with a certain relish.”—Lawrence Freedman, Survival

“Picking a word or two to describe the Steel doctrine won’t be easy… None does justice to the depth, poignancy or persuasiveness of Steel’s call for the US to put domestic priorities first, now that the threats posed to its security by other countries are few and far apart.”—Nachman Spiegel, Jerusalem Post

“Clear-eyed, hardheaded American liberalism has no more able a foreign affairs analyst than Ronald Steel, an editor at the New Republic and professor of international relations at the University of Southern California. For over 30 years…Steel has been developing a sagacious and iconoclastic body of writing on American foreign policy… [An] impressive analysis… In this small book, Steel is, as [Walter] Lippmann was, truth’s pilgrim at the plow.”—David Palmieri, The Fletcher Forum of World Affairs