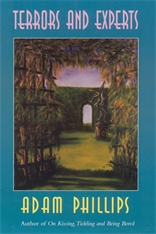 “Phillips’s specification of the play of language as entering into ‘an ordinary-language psychoanalysis’, in alluding to so-called ordinary language philosophy, is an invitation to think further of psychoanalysis in connection with philosophy, specifically with the work of J. L. Austin and of the later Wittgenstein… I find this invitation to philosophy congenial and this way of writing attractive… Reports of Adam Phillips’s celebrity suggest that his redescriptions are being rewarded. What I have noted here, in considering the relation of certain of Phillips’s texts and practices with certain philosophical others, are various cues for finding, so far as my present competence and time have served, that this cause for raising a glass is well placed.”—Stanley Cavell, London Review of Books

“In Phillips’s hands, psychoanalysis becomes an instrument of reproducible magic, a poetics you can use at home… Terrors and Experts has him wielding the writerly tools he used to such good effect in his previous [books]: paradox, aphorism, and exegesis of the mundane.”—Judith Shulevitz, The New York Times Book Review

“Skillfully dovetailing criticism of psychoanalytic theory with clinical experience, Phillips wants analysis to be playful rather than dogmatic, to celebrate ambiguity, not rigidity… Terrors and Experts displays the witty verve of On Kissing and its marvelous follow-up, On Flirtation… Terrors and Experts provides ample evidence that Phillips is one of today’s most thoughtful, as well as entertaining, writers on the mind. [He makes] an expert case for turning psychoanalysis into a more creative and pleasurable discipline.”—Bill Marx, The Boston Globe

“In three superb books, On Kissing, Tickling, and Being Bored; On Flirtation; and Terrors and Experts…[Phillips] has endorsed pleasure as a laudable goal (imagine!) and enshrined narrative as a form of soul making. In the process, he’s punched lovely skylights into the gloomy Freudian edifice and in general done much to rehabilitate the psychoanalytic enterprise by honoring the idiosyncrasy of human experience and by wielding method lightly, playfully, humanely.”—Will Blythe, Esquire

“[Phillips] radically redefines the legacy of Freud as a method of sustaining the life-giving stories that people tell themselves rather than a technological fix that will cure them. He is our leading proponent of the validity and vitality of the Freudian appeal.”—Bryan Appleyard, The Independent

“Phillips wants us to recognize that psychoanalysis is not a science but an art… He means that like the novelist and the poet, the psychoanalyst should know things that the scientist does not—things about the limits to self-knowledge, the unpredictability of the human psyche, the ambiguities of moral life, the indeterminacy of meaning… The man is so literary he makes Proust sound like the author of Modern Organic Chemistry.”—Ben Rogers, The Independent on Sunday

“Adam Phillips [is] an interesting figure. In three recent books of essays he has started to put present-day psychoanalysis on the map. He reminds us that there is more to psychoanalysis than what Freud did (or didn’t do) with Minna Bernays… What is most striking is Phillips’ intellectual confidence… His writing about psychoanalysis [has a] refreshing iconoclasm. He has ditched the old baggage—its prejudice against homosexuality, its obsession with instincts—and offers a psychoanalysis which is surprising.”—David Herman, New Statesman & Society

“Is there any point in our reading about psychoanalysis when we do not forsee engaging in it? That depends on the writer. British analyst Adam Phillips, who specializes in working with children, is one of the few commentators on the subject who writes well, holds no brief for psychoanalysis as a profession and has a lot of philosophical and human sense.”—Kenneth Baker, The San Francisco Examiner & Chronicle

“Phillips is one of the most intelligent and humane of psychoanalytic writers and Terrors and Experts contains a great number of thought-provoking and sometimes brilliant ideas. It will be of interest to anyone who feels that something is wrong whenever people get very convinced that analysts know either all or nothing.”—Alain de Botton, The Sunday Telegraph

“In spite of the scientific shakedown of their ideology, psychoanalysts continue to have much to offer, if Adam Phillips and his new book, Terrors and Experts, are any indication. A child psychoanalyst and the author of several earlier books, Mr. Phillips continues here a project begun in On Flirtation of emphasizing the importance of uncertainty, error and magic in our thinking… Mr. Phillips writes well; his phrases dance, teasing from the reader new and often exciting ways of thinking about old ideas… The book is short, generally delightful…offering much to think about during these days when that magnificent age-old battle between truth and beauty (science and art, order and disorder) continues, now rippling its way through the field of psychiatry.”—Nicola Sater, The Washington Times

“Phillips is an engagingly dialectical thinker… This brief book is dense with both provocatively subversive and hopelessly murky musings. As such, it demands to be discussed and decoded as much as read.”—Kirkus Reviews