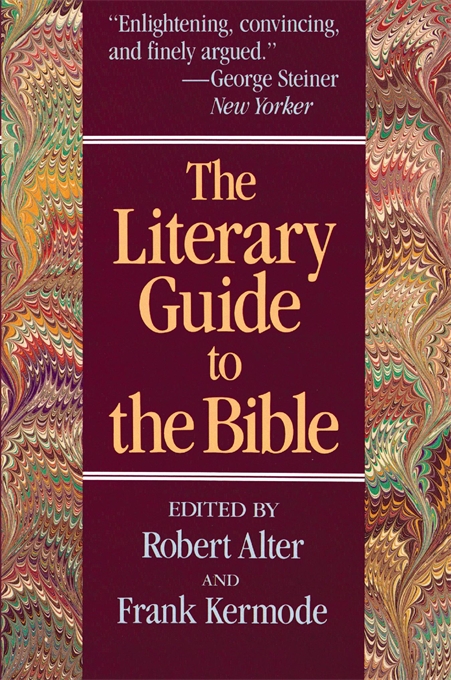 The Literary Guide to the Bible

“Professor Alter is one of our foremost lay readers and expositors of the poetic and narrative genius of the Bible. He brings to his commentaries a knowledge of Hebrew and of Judaism together with an exceptionally wide literary awareness and authority of judgment. Professor Kermode has long been eminent among teachers and critics of English and European literatures from the Renaissance to Romanticism and the moderns… [The volume] contains much that is enlightening, convincing and finely argued.”—George Steiner, New Yorker

“Robert Alter and Frank Kermode are literary critics of wide experience and formidable learning, and each has made considerable contributions to what they call the literary study of the Bible… I do not hesitate in awarding them the palm as the best guides we have so far in English.”—Harold Bloom, New York Review of Books

“Robert Alter, an outstanding biblical scholar, and Frank Kermode, one of the most notable of the literary scholars, have edited a virtual encyclopedia of literary approaches to the Bible. Readers looking for an overview of the literary turn in biblical studies could do no better than read the general introduction to The Literary Guide to the Bible (a fine, compact presentation by the editor of the book’s justifications and goals)… The editors’ stated purpose is to help individuals ‘attune themselves’ to the Bible in an age when literate people no longer have a daily intimacy with it on the basis of shared belief… Even though the task set for this book is enormous and enormously important, it is accomplished well, if not quite flawlessly… The publication of The Literary Guide to the Bible, however, marks an important moment in the history of Bible studies… This book invites the general reader, religious or not, to join in that discussion, to experience how new questions are opening up understandings of an old book.”—Elizabeth Struthers Malbon, New York Times Book Review

“Frank Kermode and Robert Alter, two critics who have given a new rigour and seriousness to the ‘Bible as literature’ movement, have brought together a constellation of literary and Biblical specialists, from both sides of the Atlantic, to explain the Bible from a literary standpoint… It is hard to see how the task could be performed better. At its best, the Guide does not merely introduce lines of interpretation unfamiliar to the nonspecialist, it also breaks new ground.”—John Barton, London Review of Books

“This volume is a needed contribution to our appreciation of the Bible as a powerful work of literature and will quickly find its place on the shelves of those who respond to its ambitious themes. If this book does nothing else but restore the scriptures to their rightful place in our cultural consciousness, it will justify the honors that, on so many other grounds, it richly deserves.”—Eugene Kennedy, Chicago Tribune

“One of the virtues of this book is that it sends one back to the reading of the Bible with clear eyes and critical instincts alert.”—Anthony Burgess, The Observer

“A monumental literary account of Scripture that is both comprehensive and accessible.”—Joseph Lowin, Hadassah Magazine

“An immensely valuable compilation of the best of recent literary scholarship into the Bible.”—Haim Chertok, Jerusalem Post Magazine

“Extraordinary… These essayists offer a cascade of new insights… [This] is a superb guide.”—Harry Goldgar, Hudson Review

“More than two dozen scholars in the United States (11), Great Britain (7), Israel (4), Canada (2), and continental Europe (2) contributed to this volume, representing a variety of academic disciplines such as English, comparative literature, and religion, under the direction of Robert Alter (Old Testament) and Frank Kermode (New Testament)… Far from being a reactionary return to the old ways of thinking, The Literary Guide to the Bible stands as a radical challenge to the scholarly establishment that has for so long dominated biblical studies… [The book] is…a distinct success in what it seeks to accomplish… Looking back over the experience of reading this remarkable volume of essays, I am inclined to recommend it highly—not so much for beginners, but rather for students acquainted with modern biblical exegesis who need another perspective. For readers frustrated by the disintegrative effect of modern commentaries it is a balm for the soul.”—David C. Fowler, Modern Language Quarterly