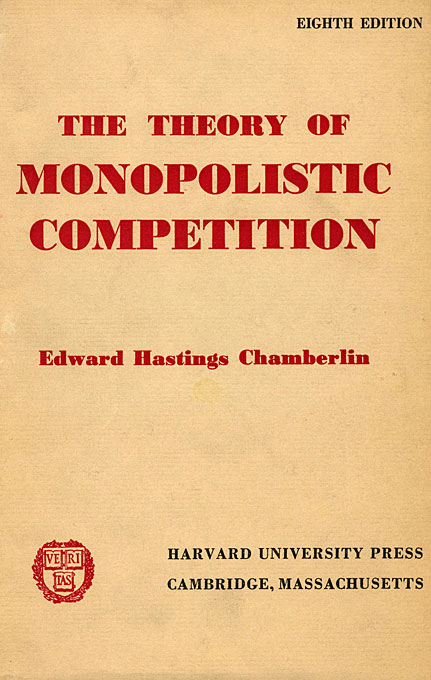 The Theory of Monopolistic Competition

A Re-orientation of the Theory of Value, Eighth Edition

Edward Hastings Chamberlain’s classic work, now in its eighth edition, continues to influence the fundamental thinking of economists and businessmen, and for the best of reasons: It is a basic treatise in theory which, unlike traditional theories of “perfect competition,” deals with the economic world we live in, including both price and nonprice competition, oligopoly, various degrees of monopoly, “differentiated” products, advertising, etc. Its influence has spread extensively as well as intensively—to new theoretical problems, such as economic dynamics and development, and to the analysis of an increasingly wide range of the so-called “applied” fields.

In this eighth edition of The Theory of Monopolistic Competition Professor Chamberlain has added three new appendices: The Definition of Selling Costs; Numbers and Elasticities; and The Origin and Early Development of Monopolistic Competition Theory. The index has been extensively revised and expanded. In successive earlier editions the author compiled a bibliography of 1497 items. He also added a new treatment of the cost curve of the firm, discussing in particular some current misconceptions as to the role of the laws of proportions and of the divisibility of factors in relation to economics and diseconomies of scale, and advancing a broader theory which assigns to both proportions and scale their proper roles.