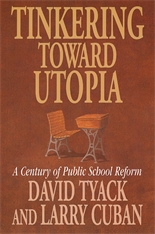 “No society has ever, at any time, tried to bring such a variety of people to so high a level of proficiency as this country has, or come as close to success as we have. American educational criticism suffers from a shocking lack of perspective, historical and cross-cultural… David Tyack and Larry Cuban…do recognize [this fact], and it’s that understanding that makes their aptly titled book so important… Surely the message Tyack and Cuban are trying to deliver is crucial: understand the political nature of school reform; involve teachers; understand how complex the process is and how much thought and patience it takes; learn from the past. When we try to use radical school reform to solve whatever public problem seems most urgent—that endless cycle of educational crisis, utopian demand and disillusionment—we fail both our schools and our society.”—Peter Schrag, The Nation

“Superb… [Tyack and Cuban] calmly put the dense tomes of the education experts in clear perspective. [They] note how Americans have always looked to the nation’s schools, with mixed results, to solve certain social, political and economic problems.”—Sara Mosle, The New Republic

“[This] is a book that should appeal to, and be read by, a wide audience: connoisseurs of millennial zeal; policy advisers; even chief inspectors of schools. Anyone, in fact, who is interested in the realities of reforming state education (known, of course, as public school education in the US) and the lessons that can be drawn from the past 100 years in America. Two insights have particular relevance. The first is that: ‘Good schools can play an important role in creating a just, prosperous and democratic society, but they should not be scapegoats and are not panaceas’… The second insight is equally important. The political will might be strong; the social conviction passionate. ‘The journey from policy talk to what occurs in schools and classrooms’, however, is ‘long, often unpredictable and complicated.’”—Chris Woodhead (Her Majesty’s Chief Inspector of Schools), New Statesman

“In their splendid little book Stanford University Professors David Tyack and Larry Cuban adopt a radical approach to the ongoing crisis in the American public school system: listen to the teacher, let the teacher decide. Thus is the conclusion of this succinct, but hard-hitting history of reform of public schools in the United States over the last hundred years… This book is…a revelation.”—Kevin White, American Studies

“This accessible examination of the reasons for and effects of such wide-ranging historic reforms as graded schools, IQ testing, school site management, and ability grouping helps to put many of today’s proposals for improving schools in sharper focus.”—Diane Manuel, The San Jose Mercury News

“The authors…are two of the brightest minds in American education. Mr. Tyack is the best education historian… Mr. Cuban…is one of the United States’ leading experts in the problems of school organization and structure… This is a bold, cobweb-clearing book that challenges many of the assumptions that Americans have about their schools. Anyone seriously interested in education reform ought to read it.”—The Washington Times

“Tinkering toward Utopia belongs in a special genre of books about education by historians. The genre does not represent history as such but draws on a deep base of historical knowldge to address wider issues of educational policy. David Tyack and Larry Cuban have successfully written a difficult book, one that demonstrates how historical perspectives can reconstruct a policy discourse… The arguments advanced here have two powerful assumptions, generally ignored in the historiography of education. First, policy making can only be understood as an ongoing ‘interaction’; a significant event changes all participants and must be examined over a sufficiently extensive period of time to know it thoroughly… Second, the authors assume that policy makers have largely been ‘elitist,’ ignorant of teachers and their locally distinctive workplaces… This fine little book demonstrates once more the gadfly power of Dewey’s ‘tinkering’ paradigm in the face of the extremist educational policies of the 1980s and 1990s.”—Paul Mattingly, Journal of American History

“Although aimed primarily at educators, this book also has enormous value for social service professionals and scholars. With the current emphasis on building communities and linking social agencies with schools, understanding school reform is vital… The spate of recent books and articles on school reform has contributed a confusing array of approaches and arguments. Through its historical analysis, this book helps to disentangle some of this confusion and offers critical lessons of history… [This] is a small book with large thoughts. For social service professionals and scholars, it is a quick but profound study in public school reform. It suggests they will be most successful if their projects help teachers solve concrete problems in teaching students… For educators, citizens, and policy makers who toil every day to push the rock of Sisyphus up the hill of change, this little tome offers some real treasures in historical perspective, argument, and realistic expectations.”—Penny Bender Sebring, Social Service Review

“Tinkering toward Utopia [is a] brief and masterful overview of one hundred years of school reform in the United States. No one has done it better! Tyack and Cuban fully deserve their 1995 Harvard University Press annual award for an outstanding publication about education and society, and their thoughtful perspectives on a century of reform efforts to improve U.S. schools would almost certainly have delighted the late Lawrence Cremin, the ‘dean’ of educational historians in the United States… Because this book combines the wisdom of its authors with a thoughtful review of the prior research of many others, its thirty pages of endnotes are particularly valuable: they constitute a gold mine for future doctoral students in education. The authors make these endnotes easy to use by printing the page numbers of the corresponding text at the top of each endnote page. Another notable strength of the book is its conciseness. Readers of Tinkering toward Utopia regularly benefit from succinct statements that summarize the authors’ views on complex issues. Any good book does this, but my reading of the prose in this brief volume makes me see the expressive powers of its writers as unusually vivid and precise. In the realm of writing about education, this aspect of the book is a rare occurrence, as education, in my experience, runs close to sociology in its capacity to generate turgid prose.”—Harold Howe II, Harvard Educational Review

“David Tyack and Larry Cuban have written the most important interpretation of the history of public school reform in many years. Beautifully written, succinctly presented, and brimming with wise observations and keen insights, Tinkering toward Utopia is one of those rare volumes that historians, educators, and interested laypeople can all profitably read to learn about the origins, complexities, and fate of various school reforms over the past century. The volume is slender in size but gigantic in its intellectual scope. And it is certain to stimulate debate. The topic—public school reform, in its various guises—is amorphous, without agreed-upon boundaries in the world of scholarship or in the public arena… By tackling such an important yet ill-defined subject, [it] is certain to arouse high praise and, one would hope, some controversy, given the nature of the subject. Many of the ideas in the book draw on the authors; previous research, which has been widely cited and very influential among historians of education… Tinkering toward Utopia demonstrates the value of history in understanding that most familiar of American institutions, the public school. Readers will have difficulty finding another book on the history of school reform that is so thoughtful, beautifully written, and timely. It is without peer.”—William J. Reese, American Journal of Education

“If I could place one book before the many people—from legislators to business and civic groups—calling for school reform, it would be Tinkering toward Utopia. It is a wise and sobering book. Tyack and Cuban raise caution about the quick fix or the ‘visionary’ solution and remind us of the power of the hard, day-to-day human work of social change.”—Mike Rose, author of Possible Lives: The Promise of Public Education in America