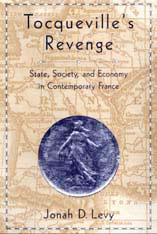 This book offers a new interpretation of the transformation of French economic policymaking and state-society relations over the past twenty-five years. In so doing, it challenges widely held views about the preconditions for state leadership and for a vibrant civil society.

France has long been characterized as a statist or dirigiste political economy, with state “strength” predicated on autonomy from a weak and divided civil society. Jonah Levy shows that this disdain for societal and local institutions has come back to haunt French officials—what he terms “Tocqueville’s revenge.” The absence of societal partners undermined the operation of dirigiste policymaking in the 1970s and early 1980s and has made it difficult to forge alternative forms of economic coordination in the post-dirigiste period.

Levy argues that just as the French state has been weakened by an absence of societal and local partners, French civil society has been weakened by the absence of a supportive state. In the 1980s, French authorities invited societal and local institutions to relay state intervention, but did little to cultivate their economic capacities. Taking the dirigiste state out of the French economy did not suffice to bring civil society back in, however. The broader lesson is that revitalizing civil society requires an active, empowering state, as opposed to an absent or indifferent state.