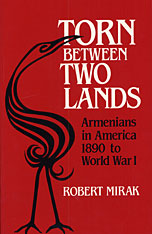 Armenians in America, 1890 to World War I

“Torn between Two Lands is the story of an ethnic group torn between its desire to create a homeland in historic Armenia and its adopted homeland, America. The result is a history of tension involving ethnic pride and identity, assimilation, and resistance to the melting pot. I recommend it highly to Armenian and non-Armenian readers alike.”—Vartan Gregorian, President, New York Public Library

“Robert Mirak’s pioneering book describes the role in American life of a significant ethnic group; and his perceptive analysis will interest all those concerned with the complex patterns of American culture.”—Oscar Handlin, Harvard University