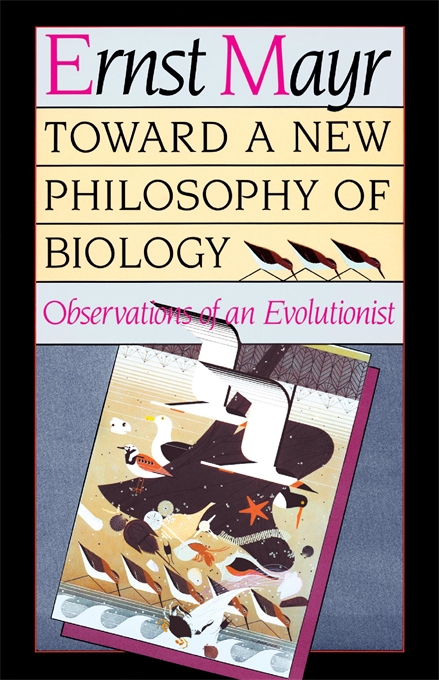 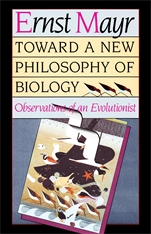 Toward a New Philosophy of Biology

Observations of an Evolutionist

“It is a pleasure to be in the company of a mind so vibrant and still exploring the boundary between the circle of what is known and the vast expanse of what isn’t.”—Lee Dembart, The Los Angeles Times

“Ernst Mayr is one of a handful of the greatest scientific minds humankind has yet produced… This beautifully presented collection of twenty-eight articles and essays, elegantly introduced and filled with important neologisms all contributing to clarity, is so close to competing with Darwin’s Origin of Species that I would not be surprised if history were to judge that Evolutionism in our century also has a Prophet… In short, this is one great classic.”—Dick Duman, Bloomsbury Review

“Mayr’s power to discern biological connections and also to identify the telling example should excite unqualified admiration… Toward a New Philosophy of Biology is a book to be developed, to be argued with, a book whose margins should be filled with exciting scribblings.”—Philip Kitcher, Nature

“Mayr is the greatest living commentator on biology; and if biology is what you do, as a researcher, teacher, writer, or as amateur, then this is a book you should own.”—Colin Tudge, New Scientist

“Never too far below the surface of Mayr the philosopher or historian lies Mayr the combative scientific streetfighter. It is in this capacity that he has been most creative, informative, and downright entertaining throughout his career; and this book is no exception… If you are at all interested in evolution—as a historian, a philosopher, or, above all, as a practicing biologist—you really should read this book.”—Niles Eldredge, BioScience