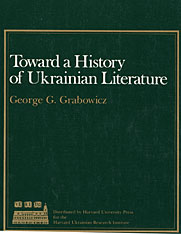 Toward a History of Ukrainian Literature

Ukrainian literature, reflecting a turbulent and often discontinuous political and social history, presents special problems to the historian of literature. In this book George Grabowicz approaches these problems through a critique of the major non-Soviet position in the field, the History of Ukrainian Literature of the eminent Slavist Dmytro Čyževs’kyj.

Grabowicz examines critically the method and theory as well as the actual literary historical argument of Čyževs’kyj’s History and challenges some of its basic premises, particularly regarding the periodization of Ukrainian literature, the thesis of its “incompleteness,” and the postulate of a purely stylistic history of literature. Ultimately, he proposes an alternative historiographic model, one which would be attuned above all to the specifics of the given culture.