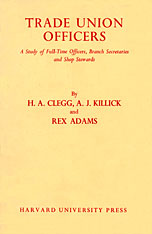 A Study of the Full-Time Officers, Branch Secretaries, and Shop Stewards in British Trade Unions

The problems of trade union officers have attracted considerable attention in recent years. It is often suggested that changes in our educational system have cut off the supply of able candidates for full–time posts, whilst attractive offers from nationalized and private industries have drained away existing talent. Trade Union officers are said to be badly paid and over–worked. Meanwhile much of the power of the unions is alleged to have passed to the shop stewards, about whose duties and characteristics relatively little is known.

This study is based upon an investigation into the records of eighteen major unions, upon local surveys, and upon the answers to questionnaires distributed nationally.

The findings of these inquiries establish firm evidence in a number of areas where previously only guess–work was available, and upset a number of popular prejudices about British trade unions. Having set them out, the authors are able to throw new light upon the structure of union bureaucracies, and upon the supply and selection of union officers, their pay and conditions of work, and their education and training.