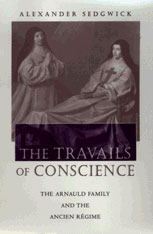 The Travails of Conscience

The Arnauld Family and the Ancien Régime

Like the Bouthilliers, the Colberts, the Fouquets, and the Letelliers, the Arnauld family rose to prominence at the end of the sixteenth century by attaching themselves to the king. Their power and influence depended upon absolute loyalty and obedience to the sovereign whose own power they sought to enhance. Dictates of conscience, however, brought all that to an end and put them in conflict with both king and pope. As a result of the religious conversion of Angélique Arnauld early in the seventeenth century, the family eventually adopted a set of religious principles that appeared Calvinist to some ecclesiastical authorities. These “Jansenist” principles were condemned by the papacy and Louis XIV.

The travails of conscience experienced by the Arnauld family, and the resulting religious schism that separated different branches, divided husbands from wives and parents from children. However, neither the historic achievements of individual family members nor the differences of opinion between them could obscure the sense of family solidarity.

The dramatic appeal of this book is underscored by a tumultuous period in French history which coincides with and punctuates the Arnauld family’s struggle with the world. We see how this extraordinary family reacted to momentous political and religious developments, as well as the ways in which individual members, by means of their own convictions, helped shape the history of their time.