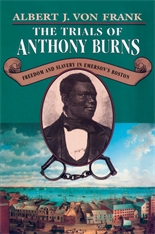 The Trials of Anthony Burns

Freedom and Slavery in Emerson’s Boston

20 halftones (19 to run as "mock "insert, plus frontispiece

Before 1854, most Northerners managed to ignore the distant unpleasantness of slavery. But that year an escaped Virginia slave, Anthony Burns, was captured and brought to trial in Boston—and never again could Northerners look the other way. This is the story of Burns’s trial and of how, arising in abolitionist Boston just as the incendiary Kansas–Nebraska Act took effect, it revolutionized the moral and political climate in Massachusetts and sent shock waves through the nation.

In a searching cultural analysis, Albert J. von Frank draws us into the drama and the consequences of the case. He introduces the individuals who contended over the fate of the barely literate twenty-year-old runaway slave—figures as famous as Richard Henry Dana, Jr., the defense attorney, as colorful as Thomas Wentworth Higginson and Bronson Alcott, who led a mob against the courthouse where Burns was held, and as intriguing as Moncure Conway, the Virginia-born abolitionist who spied on Burns’s master.

The story is one of desperate acts, even murder—a special deputy slain at the courthouse door—but it is also steeped in ideas. Von Frank links the deeds and rhetoric surrounding the Burns case to New England Transcendentalism, principally that of Ralph Waldo Emerson. His book is thus also a study of how ideas relate to social change, exemplified in the art and expression of Emerson, Henry Thoreau, Theodore Parker, Bronson Alcott, Walt Whitman, and others.

Situated at a politically critical moment—with the Whig party collapsing and the Republican arising, with provocations and ever hotter rhetoric intensifying regional tensions—the case of Anthony Burns appears here as the most important fugitive slave case in American history. A stirring work of intellectual and cultural history, this book shows how the Burns affair brought slavery home to the people of Boston and brought the nation that much closer to the Civil War.