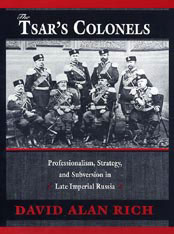 In this impressive study, David Rich demonstrates how the modernization of Russia’s general staff during the second half of the nineteenth century reshaped its intellectual and strategic outlook and equipped the staff to play a strong, and at times dominant, role in shaping Russian foreign policy.

Rich weaves together several levels of narrative to show how the increasingly sophisticated, scientific, and positivistic work attitudes and habits of the general staff acculturated younger officers, redefining their relationship with, and responsibilities to, the state. In time, this new generation of officers projected their characteristic notions onto the state and onto autocracy itself; professional concern for the security of the state eclipsed traditional unquestioning loyalty to the regime. Rich goes on to show how divergence between diplomatic and military aims among those responsible for making strategy cost the state dearly in terms of economic stability and international standing.

The author supports his findings with original research in Russian foreign policy and military archives and wide reading in published sources. The Tsar’s Colonels contributes to a number of debates in Russian military and social history and offers new insights on the structural roots of the Great War, and on the theoretical problems of modernization and professionalization.