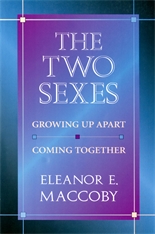 Growing Up Apart, Coming Together

How does being male or female shape us? And what, aside from obvious anatomical differences, does being male or female mean? In this book, the distinguished psychologist Eleanor Maccoby explores how individuals express their sexual identity at successive periods of their lives. A book about sex in the broadest sense, The Two Sexes seeks to tell us how our development from infancy through adolescence and into adulthood is affected by gender.

Chief among Maccoby’s contentions is that gender differences appear primarily in group, or social, contexts. In childhood, boys and girls tend to gravitate toward others of their own sex. The Two Sexes examines why this segregation occurs and how boys’ groups and girls’ groups develop distinct cultures with different agendas. Deploying evidence from her own research and studies by many other scholars, Maccoby identifies a complex combination of biological, cognitive, and social factors that contribute to gender segregation and group differentiation.

A major finding of The Two Sexes is that these childhood experiences in same-sex groups profoundly influence how members of the two sexes relate to one another in adulthood—as lovers, coworkers, and parents. Maccoby shows how, in constructing these adult relationships, men and women utilize old elements from their childhood experiences as well as new ones arising from different adult agendas. Finally, she considers social changes in gender roles in light of her discoveries about the constraints and opportunities implicit in the same-sex and cross-sex relationships of childhood.