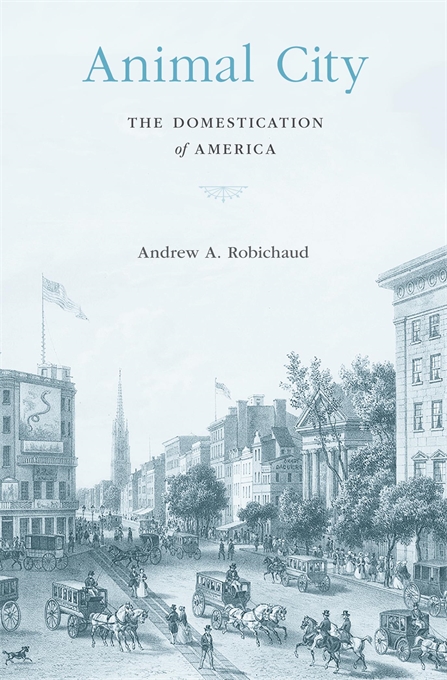 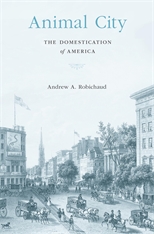 The Domestication of America

“Deeply researched and supremely analytical, with a compelling strength of narrative purpose, Animal City is a superb history. Robichaud has written the kind of book that will show even the most skeptical readers that animal history is key to grasping American history.”—Louis Warren, author of God’s Red Son: The Ghost Dance Religion and the Making of Modern America

“Based on exhaustive research, Animal City provides a rich description of nineteenth-century human and animal lives, including the landscapes, laws, economies, and institutions that shaped them. Robichaud has made a landmark contribution to how we understand this formative period in American urban and animal history.”—Peter Alagona, author of After the Grizzly: Endangered Species and the Politics of Place in California

“In this outstanding history, Robichaud powerfully recreates the snarling, barking, and mooing past where milk cows, stray dogs, slaughterhouse cattle, and working horses were part of daily life. Erasing animals from our streets and homes to improve sanitation and diminish cruelty, he argues, made it easier to justify their continued exploitation. Animal City is an eloquent reminder that this older urban menagerie persists even if we cannot always recognize our fellow residents.”—Matthew Klingle, author of Emerald City: An Environmental History of Seattle

“Animal City contends that animals are central to understanding modern cities, and modern life itself. [Robichaud’s] study demonstrates how nineteenth-century transformations in the spatial, environmental, and ethical management of animal relationships can help explain how we relate with animals today… The thematic organization and rich archival work make it very useful, while the many images and narrative vignettes make it compelling. Robichaud’s writing style is engrossing, and his stories are even reminiscent of Upton Sinclair’s in their tragedy and horror… Robichaud’s work offers a rich contribution to the literature of food, as well as to that of environment, urban studies, ethics, and governance.”—Clare Gordon Bettencourt, Agricultural History

“Fascinating and thought-provoking… The most striking contributions from Animal City come from Robichaud’s ability to bring together insights from animal studies, environmental history, urban geography, and the history of capitalism to demonstrate how human decisions about domestic animals powerfully molded the relationship between city and hinterland, the nature of urban space, and the dynamics of political power.”—Jessica Wang, American Historical Review

“Animal City unites the vibrant fields of urban environmental history and animal history… To this literature, Robichaud brings strong spatial analysis and a sense of how local stories aggregate to a bigger whole. He also reveals that there is a lot to gain from the cross-fertilization of animal history and business history: remaking the animal city was also about remaking American business.”—Joshua Specht, Business History Review

“Robichaud tells a series of stories rooted in the gritty, sometimes horrific, daily living conditions of urban animals and the human politics and economic exigencies around them… Contain[s] valuable insights for historians operating in an academic context shaped by pandemic, climate crisis, accelerating human population growth, and our tendency to congregate in densely populated spaces where we ignore our reliance upon the lives and health of nonhumans.”—Susan Nance, Environmental History

“Sharply details the coexistence of livestock separation and the humane movement, and while it stops short of demonstrating co-creation, there is great value nevertheless to Robichaud’s effort to understand the two phenomena in relation to one another. Ultimately, Animal City opens up a wide range of questions for future environmental historians, urban historians, and animal studies scholars… Convincingly argues against technological determinism to show that urban animal geography was often shaped by policy choices that preceded the building of railroad infrastructure, and in this argument are lessons for the present day.”—Laura Martin, H-Environment

“A valuable contribution to the literature on urbanization that continues to transform the way historians understand nineteenth-century cities. The stories it tells, such as those of urban cattle drives thundering through the streets of San Francisco, will help expand the traditional narratives of urbanization in America.”—Michael Rawson, Journal of American History

“A book of impressive scope… It is a superb contribution to animal history, environmental history, urban history, and nineteenth-century history. It is well written and accessible, and it would be a fine book to introduce anyone to animal history.”—Ann Norton Greene, Journal of Arizona History

“A welcome historical exploration of the ways in which human–animal relationships have played ongoing, and oftentimes disturbing, roles in urban development… Engaging and unique.”—Julie Urbanik, Journal of Historical Geography

“A worthwhile addition to the historical literature of animals in the city.”—Joel A. Tarr, Journal of Interdisciplinary History

“A compelling, thoroughly researched, and, at times, lively book that documents and interprets how and why animal life shifted in the late 1800s as American cities were developing. Through archival analysis of turn-of-the-20th-century materials, Robichaud investigates how animal species—cattle, dairy cows, pigs, and sheep—disappeared from American cities, while other species, including horses, companion animals, and zoo animals, flourished. The book offers historical insights to enhance our contemporary reappraisals of how humans and animals live together and co-construct urban ecologies.”—Lisa Jean Moore, Metropolitics

“A fascinating look at the ways in which domestic and exotic animals occupied New York and San Francisco during the nineteenth century…this thought-provoking, deeply researched, and well-written study is a welcome contribution to the growing literature on animals in America.”—J. L. Anderson, Pacific Historical Review

“Robichaud could scarcely have imagined a year like 2020 when he was writing this insightful study of nineteenth-century urban life… Thoroughly researched, convincingly argued and engagingly written, Animal City offers a great deal to researchers, students, and general readers interested in urban, environmental, or social history. Perhaps most importantly, it encourages us to confront the various forms of human and non-human animal suffering which we continue to force out of sight and mind, with all the unintended consequences that this might entail.”—Thomas Almeroth-Williams, Reviews in History

“A vital read for all to understand the development of the modern city and new regulatory systems, as well as the human role in the treatment of animals, domesticated for food or work, or the exhibition of exotic species.”—Choice