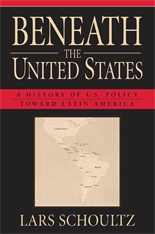 Beneath the United States

“In his valuable history of United States policy towards Latin America, Beneath the United States, Lars Schoultz demonstrated how three interests have determined the content of that policy for more than 200 years: the need to protect US security, the demands of domestic politics, and the drive to promote US economic development. While time and circumstance affect the exact mix of reasons behind the overall policy, these three interests are permanent.”—George Victers, The Times Literary Supplement

“This excellent study breaks new ground in a field so cluttered that one usually harbours very low expectations of originality, style and fresh scholarship. Schoultz, a political scientist hitherto best known for his study of human rights, has written a lucid history that derives much of its strength precisely from its understanding of the conservative and expansionist presumptions of those who have formulated and implemented US policy towards the rest of the continent since independence. This, though, is not an understanding assumed with the ease that one generally finds in texts on this topic; here it is based on meticulous research of primary documentation… Schoultz’s knowledge of the sources comes through in the excellent use of quotation within a briskly written and delightfully jargon-free prose… Of the plethora of single-volume studies of this vital subject Lars Schoultz’s is easily the best.”—James Dunkerly, International Affairs

“[Beneath the United States] is a thorough and comprehensive guide to US/Latin American relations and the sometimes tedious US policies involved. Schoultz writes clearly and in depth with fresh insight and provocative views. Above all the book demonstrates the US attitude of superiority towards Latin American both overt and covert, and how this attitude must change if a constructive hemispheric alliance is ever to be achieved. Amazingly extensive research digging deep into the rich archival sources available is apparent throughout the book and this is what will most probably make it the standard one-volume work in the field.”—British Bulletin

“Beneath the United States serves as a good overview of official U.S. attitudes toward Latin American countries from the time of their independence to the more recent U.S. support of insurgent forces in Latin American countries in an effort to install regimes receptive to perceived U.S. economic and security interests. Many specific incidents are covered, giving this work some reference value to anyone needing to know something about a particular affair, although it is meant to be read as a complete history… The book reads easily, and could even be described as entertaining.”—Mark A. Thomas, Journal of Government Information

“Written with a sharp sense of humour, Lars Schoultz’s Beneath the United States is a strong criticism of US policy towards Latin America for almost 200 years. Schoultz’s work integrates the most popular interpretations of US policy and gives them order and coherence by arguing that US hegemony, implemented in a variety of styles, was ultimately shaped by the belief of Latin American cultural inferiority… It is a book about misperceptions, narrow definitions and ethnocentrism that accurately depicts training and sensitivity deficits about Latin America in the minds of most US policy-makers… Schoultz’s work is essential reading for students of US foreign policy and US–Latin American relations for it provides a powerful and barely used argument about the (recurring) failure of US policy towards its southern neighbours. Beneath the United States contributes to the advancement of knowledge by making it clear that the literature about US policy towards Latin America still has many hypotheses to prove.”—Ana Covarrubias, Latin American Studies

“This book is about racism and the ideas of racial superiority that justified the whole process of U.S. expansionism… [It] is not, therefore, a conventional history. It is as much about the ideas of those taking part in events as the events themselves… Schoultz provides an excellent exposure of [the United States’s] hypocrisy, double-dealing and avariciousness, especially in the chapters dealing with the attempted annexation of Cuba and the subsequent neocolonisation of the island… Highly recommended.”—Steve Wilkinson, Morning Star

“Beneath the United States is a rich historical examination of US foreign policy toward Latin America from the early 1800s to 1996… The volume stands apart from other works in the field in that the unifying theme throughout is the well-documented argument that US policy makers consistently have treated their southern neighbors as inferiors. Of course, Schoultz also includes the more standard explanation for US behavior—national interest based on security, domestic, and economic issues—but it is the abundance of quotations by US officials, and even a few presidents, referring to Latin Americans in a condescending manner that really drives home the point… The historical narrative style makes this volume eminently readable. It is replete with fascinating details that are often overlooked, such as the opportunity to annex the Dominican Republic in 1869. Recommended for all college and university collections.”—L. Boudon, Choice

“A splendid and important book—exhaustively researched, cogently and eloquently written, at once passionate and thoughtful… Schoultz’s approach works both as intellectual history and as diplomatic history.”—John Coatsworth, Harvard University

“A ‘must read’ for anyone interested in hemispheric affairs, past, present, or future.”—William LeoGrande, American University

“Clear, compelling, provocative, Beneath the United States will stimulate reflection and debate for years to come.”—Peter Smith, University of California, San Diego