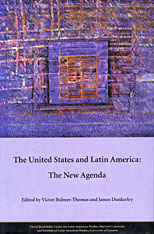 The United States and Latin America

The end of the Cold War removed hemispheric security from the top of the agenda of U.S.-Latin American relations. Democracy, trade and investment, drugs, and migration rose in importance. Pressures to eliminate the anachronistic U.S. embargo on Cuba increased. The new agenda also includes Latin America’s growing ties to the countries of the European Union and other regions.

This book contains fifteen essays by distinguished U.S., Latin American, and European scholars on each of these issues, framed by overviews of the changing historical context from the nineteenth century to the end of the Cold War. Authors include such notables as Harvard scholars John Coatsworth, Jorge Domínguez, and Marcelo Suárez-Orozco; European academics such as editors James Dunkerley and Victor Bulmer-Thomas; and Latin American intellectuals such as Eduardo Gamarra and Rodolfo Cerdas-Cruz.