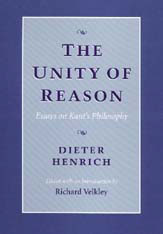 The Unity of Reason

Kant holds a key position in the history of modern philosophy as the last great figure to belong fully to both the Anglo-American analytic tradition and the Continental tradition. As the world’s foremost scholar of Kant and German Idealism, Dieter Henrich combines an encyclopedic knowledge of Kant’s texts with an equally profound understanding of the philosophers of preceding and succeeding centuries. In this collection comprising four of his most influential essays, Henrich proves himself unique in the conjunction of philosophical acumen, insight, and originality that he brings to Kant interpretation.

Henrich’s distinctive contribution has been to break through the entrenched stereotypes of the ontological and neo-Kantian schools of Kant interpretation in order to place Kant’s major ideas in their historical and developmental context, demonstrating their enduring philosophical significance. Henrich has shown how Kant’s attempt to overcome the dichotomy between rationalism and moral-sense philosophy led to a lifelong struggle to establish the unity of theoretical and practical reason and the inseparability of the motivational force of the principle of ethics from its function as a principle for ethical judgment. But Henrich has also shown how Kant’s project of unification contained fundamental tensions that called forth the projects of such post-Kantians as Schiller, Fichte, and Hegel, which explored new approaches within the Kantian framework.

The heart of Henrich’s interpretation of Kant, the essays in this book present a persuasive picture of the development of Kant’s moral philosophy and give an account of the argumentative strategies determining all the aspects of Kant’s philosophy. They reflect Henrich’s general interest in the unity of reason as well as his special interest in self-consciousness as both a key concept of modern philosophy and the key to the highly disputed interpretation of Kant’s transcendental deduction of categories.