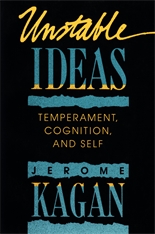 Temperament, Cognition, and Self

In his most probing and expansive work to date, Jerome Kagan—one of this country’s leading psychologists—demonstrates that innovative research methods in the behavioral sciences and neurobiology, together with a renewed philosophical commitment to rigorous empiricism, are transforming our understanding of human behavior. Contemporary psychology, according to Kagan, has been preoccupied with three central themes: How malleable is temperament? How predictable are the milestones of cognitive development? How accurate is consciousness as a window onto the self, its motives, beliefs, and emotions?

In a review of past approaches to these questions, Kagan argues persuasively that behavioral scientists have reached less-than-satisfactory answers because they have failed to appreciate the biases inherent in their frame of reference and the limitations of their investigative procedures. He calls into question a number of techniques that have been mainstays of psychological investigation: the Ainsworth Strange Situation for assessing the emotional attachment of an infant to its mother, and interviews and questionnaires as indexes of personality, to name only two. Kagan’s own research has used novel laboratory situations to discover a group of children who exhibit a pattern of behavior he calls “temperamentally inhibited”—they are restless and irritable from birth, and by twenty-four months cling to the mother and show biological signs of high anxiety in unfamiliar situations.

These findings, coupled with current understanding of the structure and chemistry of the nervous system, lead him to speculate that these children are born with a biological predisposition that favors the development of a shy, fearful personality. Through longitudinal studies of this kind, as well as through his cross-cultural investigations of cognitive development, Kagan has infused new meaning into the nature–nurture debate.