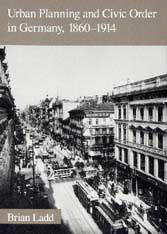 This unique contribution to social and urban history describes the struggle of prosperous German bourgeois leaders to bring order to their rapidly growing cities during the tumultuous age of industrial expansion in the decades before World War I. Brian Ladd sets the emerging theory and practice of city planning in the context of debates about the nature of the modern city and the possibility of improving society by regulating its physical environment. In so doing, he reveals the extent to which modern city planning is a product of the aspirations, prejudices, and frustrations of the German burghers who created it.

He sifts through the often contradictory motives underlying public health works (including waterworks, sewers, baths, and parks); plans for streets and squares, especially in new developments; working-class housing, zoning, public transit, and aesthetic concerns. He examines planning as civic boosterism and as social reform, identifying the reformers and describing their role in urban politics and society. His analysis focuses on Düsseldorf, Cologne, and Frankfurt-am-Main, but also pays considerable attention to Berlin and other cities.

This broad-gauged view of an increasingly popular subject will enlighten historians of Germany and of modern Europe, urban historians, city planners, and architectural historians.