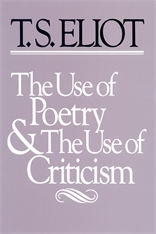 The Use of Poetry and Use of Criticism

Studies in the Relation of Criticism to Poetry in England

The 1932–33 Norton Lectures are among the best and most important of T. S. Eliot’s critical writings. Tracing the rise of literary self-consciousness from the Elizabethan period to his own day, Eliot does not simply examine the relation of criticism to poetry, but invites us to “start with the supposition that we do not know what poetry is, or what it does or ought to do, or of what use it is; and try to find out, in examining the relation of poetry to criticism, what the use of both of them is.”

Eliot begins with the appearance of poetry criticism in the age of Dryden, when poetry became the province of an intellectual aristocracy rather than part of the mind and popular tradition of a whole people. Wordsworth and Coleridge, in their attempt to revolutionize the language of poetry at the end of the eighteenth century, made exaggerated claims for poetry and the poet, culminating in Shelley’s assertion that “poets are the unacknowledged legislators of mankind.” And, in the doubt and decaying moral definitions of the nineteenth century, Arnold transformed poetry into a surrogate for religion.

By studying poetry and criticism in the context of its time, Eliot suggests that we can learn what is permanent about the nature of poetry, and makes a powerful case for both its autonomy and its pluralism in this century.