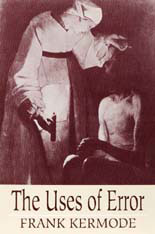 The Uses of Error

“The history of interpretation, the skills by which we keep alive in our minds the light and dark of past literature and past humanity, is to an incalculable extent a history of error.” So writes Frank Kermode of a history to which he has contributed many luminous pages. This book is a record of Kermode’s “error,” his wandering through literature past and present. He notes that “in thirty-odd years I have written several hundred reviews, an example I would strongly urge the young not to follow.” From these hundreds Kermode has selected the pieces he treasures most, and they provide an example that indeed will be difficult to follow.

The Uses of Error contains some of Kermode’s very best writing. Again and again he proves himself to be more than a commentator or chronicler; he is rather a creator of cultural value in his interaction with the texts at hand. The appeal of this book is broad. Everything is here from Augustine to Aries on death and dying, from Wilde to Woolf and writer’s block, from Joachim of Fiore to Flaubert’s Parrot. In a phrase or an aside on any of these subjects Kermode can open a vista, wither a reputation, or spotlight an intellectual mantrap.

The core of the volume is a group of essays on the central figures of modern English literature. Kermode tells more here—about Tennyson, Shaw, Forster, and Eliot—than most people could in twice the space. His brief, vivid, and sympathetic writings extol the range of British writing and mark out the difference between an interest that is solely academic and the richer view of one who writes from inside the culture and shares a common experience with its interpreters.

There is also Kermode the man. He saves a set of autobiographical essays until the end, and they are a veritable dessert for those who read the volume straight through. But they will stand first in the reader’s memory afterward, because they give body to the mind so clearly in evidence throughout the book. Kermode shows us the means by which he gained the perspective to become a transnational critic—not a critic on the margin, but one who shows us where the margins are. For anyone who is not yet familiar with Frank Kermode’s work, this is the place to begin. For those who are already acquainted with it, here is the chance to see the pattern of the whole.