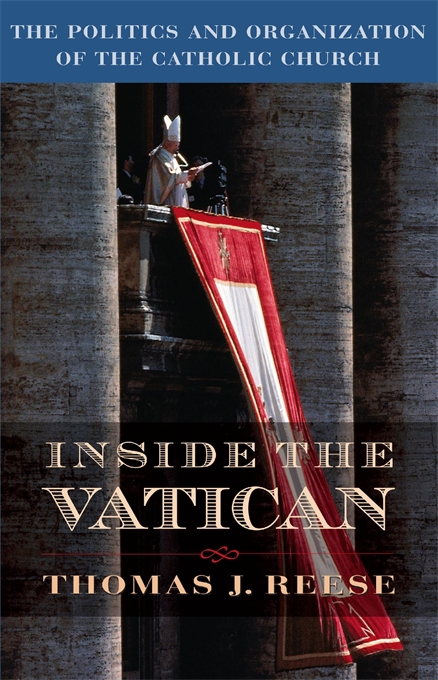 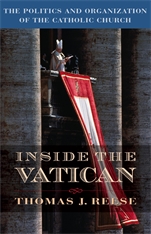 The Politics and Organization of the Catholic Church

“Thomas Reese does an admirable job of lifting the veil of secrecy surrounding the Holy See to examine the nuts and bolts of the operation… [He] paints a revealingly human portrait of Vatican life… Ultimately, this is the merit of Inside the Vatican: Reese gets it right. And in [such] a place…that’s no easy task.”—Greg Burke, Time

“A Jesuit at home, as you would expect, in theology, history and current affairs, Thomas Reese conducts an insider’s tour of the Vatican. With a papal election near, this is a handy…guide to the politics of a faith in mid-struggle between ancients and moderns.”—The Economist

“What goes on behind the Vatican’s walls has long been a mystery to much of the outside world. Everybody knows about the white smoke that signals the election of a new pope by the College of Cardinals; but what kind of politicking and debate is there? How are ballots cast? How are cardinals chosen anyway? Reese, a Jesuit scholar who is a senior fellow at the Woodstock Theological Center at Georgetown University, answers these questions and many more, explaining everything from the pope’s many roles…to how the Vatican runs its finances.”—The Washington Post Book World

“Thomas Reese undertakes the Herculean task of trying to penetrate the shroud of mystery surrounding the Vatican. Remarkably, Father Reese, a Jesuit and senior fellow at Georgetown’s Woodstock Theological Center, has managed to pull if off. In relatively concise fashion, he paints a clear, largely dispassionate and often compelling picture of Vatican operations and, in so doing, highlights the tensions that tear the church.”—Diego Ribadeneira, The Boston Globe

“Any journalist who has tried to cover the Vatican will appreciate the Rev. Thomas Reese’s book on the politics and organization of the world’s oldest—and one of its most secretive—institutions… This even-handed and meticulously researched study of Vatican City and the papal bureaucracy couldn’t come at a better time.”—Don Lattin, The San Francisco Chronicle

“[T]his is a useful and even valuable study of the institutional centre of the Roman Catholic Church, and of the relations between the centre, and the worldwide network of local churches which go to make up the Church catholic. Dr. Reese…brings impressive qualifications and experience as a political scientist to this [study]… It is the special virtue of Dr. Reese’s study that he succeeds where many have failed in providing an analytic, critical and comprehensive account of how [the Vatican] works.”—Seán Mac Réamoinn, The Irish Times

“Reese has given a precise description of the Vatican as an organisation—or rather three interlocking organisations, one dealing with the spiritual administration of one billion Roman Catholics and 4,000 bishops, one running the Vatican mini-state and one supporting the extensive foreign policy work of the Pope. In this book…the sources are mainly anonymous…[but] anonymity adds to its authority and interest. Reese is good on Vatican bureaucrats and good at the questions. His sources tinkle with gossip and loyal criticism of the papacy… [I]t is a thorough book.”—Roger Boyes, The Times

“Father Reese’s work stands out in a number of ways. It is intriguing but not gossipy. It offers critique without slipping into polemics. It provides a wealth of detail about the institution, yet never lets the human element slip from view.”—John Thavis, Catholic News Service

“[This] is a very useful reference for those who want to know how the Holy See operates… Without a doubt, Reese’s treatment of papal elections will be a very valuable reference tool when the successor of John Paul II is elected… Reese’s style is clear, concise, and nonjudgmental… [He] gives a balanced picture of the structure, procedures, and people of the Vatican.”—Daniel F. Hoye, Commonweal

“Perhaps the best examination of the ‘politics and organization’ of the Catholic Church’s headquarters.”—Contemporary Review

“Thomas Reese has included…fascinating anecdotes in his study of life inside the Vatican kingdom.”—Kieran Cooke, Financial Times