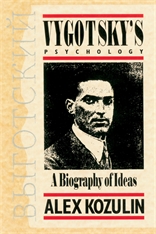 A Biography of Ideas

Alex Kozulin, translator of L. S. Vygotsky’s work and distinguished Russian-American psychologist, has written the first major intellectual biography about Vygotsky’s theories and their relationship to twentieth-century Russian and Western intellectual culture. He traces Vygotsky’s ideas to their origins in his early essays on literary criticism, Jewish culture, and the psychology of art, and he explicates brilliantly his psychological theory of language, thought, and development.

Kozulin’s biography of Vygotsky also reflects many of the conflicts of twentieth-century psychology—from the early battles between introspectionists and reflexologists to the current argument concerning the cultural and social, rather than natural, construction of the human mind.

Vygotsky was a contemporary of Freud and Piaget, and his tragically early death and the Stalinist suppression of his work ensured that his ideas did not have an immediate effect on Western psychology. But the last two decades have seen his psychology become highly influential while that of other theoretical giants has faded.