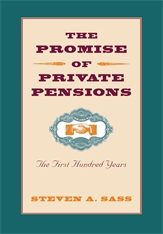 The Promise of Private Pensions

The private pension is a curiosity in the modern economic environment. Why do profit-seeking companies pay retirement benefits to those no longer on the job? In this new institutional history, Steven Sass explores the rise and growth of the financial support system that today commands trillions of dollars of investment capital and supports hundreds of thousands of older Americans.

Before 1900 America’s elderly derived their livelihood from simple sources. They worked if they could, relied on their children, and took charity if necessary. By the dawn of the twentieth century, however, the country was constructing a new industrial economy. Both laborers and capital were moving away from farms toward large corporate establishments. These market changes weakened family links and traditional skills, rendering workers more vulnerable to economic shocks. The elderly, in particular, fell out of step with the new mechanized and bureaucratic regime. It was in response to these dramatic economic shifts that the institution of private pensions emerged. In return for workers’ long-term loyalty, employers promised to help sustain them through old age.

As Sass shows, creating the pension system proved far more complicated than anyone had anticipated. Over the last hundred years it has evolved into a complex institution driven by congressional mandates, judicial/administrative decisions, union campaigns, political debates, and the ministrations of lawyers, economists, human resource specialists, actuaries, and insurance experts. Sass traces the U.S. pension system through to the present day, exploring how our modern corporate economy is confronting the challenges of an aging population.