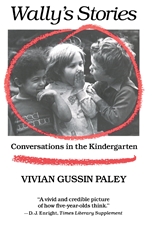 Teachers are often taught that young children are incapable of logical thought. Prone to fantasy and unruffled by inconsistency, preschool children are frequently baffled by the first lessons of early schooling. Trained to gently resist the child’s illogic, teachers sometimes create just the incomprehension and anxiety they mean to avoid. In Wally’s Stories, Vivian Paley shows that none of this need be so.

Wally’s Stories is itself a story: the story of the evolution of a kindergarten classroom in which Paley learned to stop fighting childish fantasy and instead make use of it to stimulate the very best brand of thinking her five-year-olds can muster. Stories also lie at the heart of her classroom: stories that are first told by one of the children, then transcribed by the teacher, and then acted out by the class in dramatic productions of their own design. Paley shows that in the course of creating their own dramatic world, five-year-olds are capable of thought and language far in advance of what they accomplish in traditional classroom exercises. The children’s stories also become a vehicle that they can use to explain themselves to their teacher and to one another. Together, teacher and children develop an unusual environment, one that is logical and literate, based on rules of fairness, friendship, and fantasy.

Vivian Paley’s book is as refreshing as her teaching method—a new kind of book about a new kind of classroom.