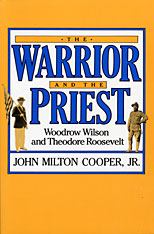 The Warrior and the Priest

The colossal figures who shaped the politics of industrial America emerge in full scale in this engrossing comparative biography. In both the depth and sophistication of intellect that they brought to politics and in the titanic conflict they waged with each other, Roosevelt and Wilson were, like Hamilton and Jefferson before them, the political architects for an entire century.

All previous efforts to treat the philosophies and programs of Roosevelt’s New Nationalism and Wilson’s New Freedom have been partial and episodic. Now John Milton Cooper reconstructs in parallel lines the entire range of their ideologies and their struggles—their social identification in terms of class, education, and regional roots; the origins and evolution of their political thought; their party leadership roles; and their psychological characters.

After tracking the shared identities of young manhood, Cooper explains the conflict of their mature years that developed from opposing philosophies of government. Not until 1912, when Wilson ran for president, did they come together partially and briefly on common practical grounds of reform of the political process and efforts to curb big business in the public interest. Later, foreign policy in particular pitted them in a deeper conflict that consumed the rest of their lives.