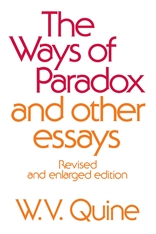 The Ways of Paradox and Other Essays

“[Quine] is at once the most elegant expounder of systematic logic in the older, pre-Gödelian style of Frege and Russell, the most distinguished American recruit to logical empiricism, probably the contemporary American philosopher most admired in the profession, and an original philosophical thinker of the first rank… The title essay of Quine’s The Ways of Paradox is a beautifully concise survey of the nature and significance of paradoxes… In general Quine’s style combines a certain rotundity of utterance with a verbal wit that exploits the submerged associations and resonances of technical terms.”—Anthony Quinton, The New York Review of Books

“The remarkable feature of this collection of essays is the achievement of profundity without the sacrifice of clarity. More than a clear, concise, nonmathematical presentation of logical perplexities and problems, this work is one written so that any intelligent layman can grasp the ideas wrestled with by Quine and other leading logicians. The manner in which the author interprets the pioneers of logical thought possesses the fascination of an exciting game rather than a dry intellectual exercise.”—William S. Sahakian, The Boston Globe

“Willard Van Orman Quine is the distinguished Harvard logician and philosopher who for more than a generation, and in prose as fresh and provocative as it is precise, has contributed fundamentally to the substance, the pedagogy, and the philosophy of mathematical logic.”—Science