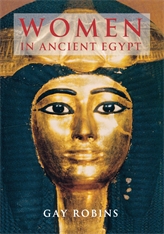 An idealized version of women appears everywhere in the art of ancient Egypt, but the true nature of these women’s lives has long remained hidden. Gay Robins’s book, gracefully written and copiously illustrated, cuts through the obscurity of the ages to show us what the archaeological riches of Egypt really say about how these women lived, both in the public eye and within the family.

The art and written records of the time present a fascinating puzzle. But how often has the evidence been interpreted, consciously or otherwise, from a male viewpoint? Robins conducts us through these sources with an archaeologist’s relish, stripping away layer after interpretive layer to expose the reality beneath. Here we see the everyday lives of women in the economic, legal, or domestic sphere, from the Early Dynastic Period almost 5,000 years ago to the conquest of Alexander in 332 BC. Within this kingdom ruled and run by men, women could still wield influence indirectly—and in some cases directly, when a woman took the position of king. The exceptional few who assumed real power appear here in colorful detail, alongside their more traditional counterparts. Robins examines the queens’ reputed divinity and takes a frank look at the practice of incest within Egypt’s dynasties. She shows us the special role of women in religious rites and offices, and assesses their depiction in Egyptian art as it portrays their position in society.

By drawing women back into the picture we have of ancient Egypt, this book opens a whole new perspective on one of world history’s most exotic and familiar cultures.