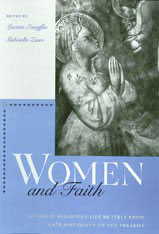 Catholic Religious Life in Italy from Late Antiquity to the Present

Feminist thought has wrestled with the question of whether religion has been principally responsible for the oppression of women or instead has provided access to culture, public life, and—sometimes—power. This study of Italian women and Catholicism from the fourth through the twentieth century reflects this conflict and the tension between the masculine character of divinity in the Catholic Church and the potential for equality in the gospels and early writings (“neither male nor female, but one in Jesus”).

The various chapters in this book consider the institutions within which religious women lived, many of which they themselves founded or reorganized. In addition to overviews of women and the religious life throughout the periods under study, specific chapters focus on mystical marriage, religious writings by women, secular writings by nuns, women in sacred images, women in the nineteenth-century Christian family, Marian pilgrimages, and depictions of sisters and saints in film. The authors, leading American, Italian, and French scholars, have drawn on rich resources to provide a panorama of sixteen centuries of Italian history, religious history, and women’s history.