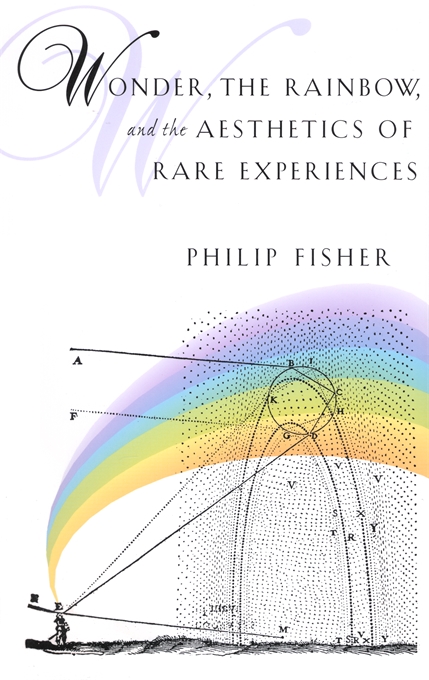 Wonder, the Rainbow, and the Aesthetics of Rare Experiences

“Like Kant, Fisher wants to sketch out ‘the lively border’ between aesthetics and intelligibility, and he is to be applauded for pursuing this border in and of itself, without reducing aesthetic experience to ideology, sociology, or identity politics, as the greater part of university literary criticism has tended to do over the past decade. Unlike Kant, Fisher employs an eclectic discursive method, passing with admirable erudition from Descartes’ account of the rainbow to Plato’s geometrical problem of how to double the area of a square to an analysis of two abstract canvases by Cy Twombly.”—Adam Bresnick, The Times Literary Supplement

“In Wonder, the Rainbow, and the Aesthetics of Rare Experiences, Philip Fisher confronts one of our most fundamental cliches about the modern era: that science, by explaining the mechanics of the physical world, has demystified our world. We now know how tornadoes and rainbows work, how suns and planets are made, and how a caterpillar becomes a butterfly. Has this knowledge brought a loss of innocence? …Fisher argues the opposite… In this delightful history of attempts to understand the rainbow, Fisher shows that wonder and science walk hand in hand… Wonder, the Rainbow, and the Aesthetics of Rare Experiences is an excellent exercise in stretching the mind, and it is full of extraordinary insights. With his study, Fisher has emulated the actors in the grand story of human learning—the pioneers who went after the wonderful, and in so doing, gave us more.”—David Grayson, The San Francisco Bay Guardian

“A short but ample book, in which Fisher ranges well beyond his home territory of literature into science, mathematics, philosophy, architecture, mythology, and modern art and where Shakespeare rubs shoulders with Frank Lloyd Wright, Nabokov with Aristotle, Newton with Cy Twombly. Fisher takes wonder where he finds it, in the Chicago skyline, Miranda’s exclamations in The Tempest or Descartes’s explanation of the rainbow. Experiences of wonder may be by definition rare, but for Fisher they are dispersed all over the map of knowledge… This is a learned, cultivated work.”—Lorraine Daston, London Review of Books

“An impressive literary–philosophical–geometric thesis that argues for the primacy of the feeling of wonder on confronting rare beauty in art or in nature.”—The Guardian

“At a time when so much writing in the theory of art and the criticism of culture can seem to sublime itself without managing to become interesting, Philip Fisher has produced an aesthetics of wonder that provides the freshness of experience he undertakes to explain.”—Stanley Cavell, author of A Pitch of Philosophy

“Philip Fisher’s book on wonder is a brilliant, original, and wide-ranging study of a subject that has only recently become visible to intellectual historians. It is also, like all Fisher’s work, marvelously lucid and richly suggestive.”—Michael Fried, author of Manet’s Modernism

“Philip Fisher’s new book not only is about wonder, but is in itself a wondrous performance—fresh, provocative, original, and sure to provoke lively debate in the fields of aesthetics and epistemology.”—W.J.I. Mitchell, author of Picture Theory