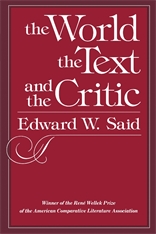 The World, the Text, and the Critic

This extraordinarily wide-ranging work represents a new departure for contemporary literary theory. Author of Beginnings and the controversial Orientalism, Edward Said demonstrates that modern critical discourse has been impressively strengthened by the writings of Jacques Derrida and Michel Foucault, for example, and by such influences as Marxism, structuralism, linguistics, and psychoanalysis. He argues, however, that the various methods and schools have had a crippling effect through their tendency to force works of literature to meet the requirements of a theory or system, ignoring the complex affiliations binding the texts to the world.

The critic must maintain a distance both from critical systems and from the dogmas and orthodoxies of the dominant culture, Said contends. He advocates freedom of consciousness and responsiveness to history, to the exigencies of the text, to political, social, and human values, to the heterogeneity of human experience. These characteristics are brilliantly exemplified in his own analyses of individual authors and works.

Combining the principles and practice of criticism, the book offers illuminating investigations of a number of writers—Swift, Conrad, Lukács, Renan, and many others—and of concepts such as repetition, originality, worldliness, and the roles of audiences, authors, and speakers. It asks daring questions, investigates problems of urgent significance, and gives a subtle yet powerful new meaning to the enterprise of criticism in modern society.