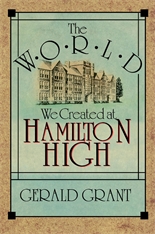 The World We Created at Hamilton High

In this wonderfully evocative picture of an urban American high school and its successes and setbacks over the past thirty-five years, Gerald Grant works out a unique perspective on what makes a good school: one that asserts moral and intellectual authority without becoming rigidly doctrinaire or losing the precious gains in equality of opportunity that have been won at great cost.

Grant describes what happened inside Hamilton High (a real school, although its identity is disguised), and how different worlds evolved as the school’s authority system was transformed. After the opening of Hamilton High in the buoyant and self-confident 1950s, the school plunged into a period of violence and radical deconstruction in the late sixties. Grant charts the rise of student power in the seventies, followed by new transformations of the school in the last decade occasioned in part by the mainstreaming of disabled students and the arrival of Asian immigrants. Things got very bad before they got better, but they did get better. The school went from white power to black power to genuine racial equality. Its average test scores declined and then improved. Although test-score means did not return to their former levels, the gap in achievement between the social classes decreased. Violence was replaced by a sense of relative safety and security.

Yet this book is not just a case study. In the second half the author presents a general analysis of American education. He contrasts the world of Hamilton High with other possible worlds, including those at three schools (one public and two private) that exhibit a strong positive ethos. He looks at the way the moral and intellectual worlds have been sundered in many contemporary public schools and asks whether they can be put back together again.

The book is grounded in a creative methodology that includes research by students at Hamilton High, whom Grant trained to analyze life in their school. Later he shared this research with teachers as a means of opening a dialogue about what changes they wanted to make. Grant’s analysis leads to recommendations for two essential reforms, and in an epilogue the teachers who read this hook also tell us what they make of it and offer their own conclusions. Their challenging final words will spur the thinking of educators, policymakers, scholars, parents, and all those who are concerned about our schools today.