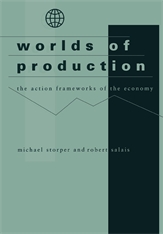 The Action Frameworks of the Economy

This intellectually bold but accessible book seeks to go beyond limitations of the reigning neoclassical and institutional paradigms in explaining the organization of economic activity. It does this by construing "non-economic" factors such as institutions, cultures, and social practices as conventions, which coordinate economic actors by defining specific "frameworks of economic action." In these conventional frameworks, the standard distinction between economic and non-economic no longer exists. The authors explore in detail four basic frameworks--or "possible worlds of production"--which underpin the mobilization of economic resources, the organization of production systems and factor markets, patterns of economic decision making, and forms of profitability. The case studies examine how these possible worlds act to support innovative production complexes in a variety of sectors in several countries.

Storper and Salais show that economic actors coordinate actions with one another and interpret what others are doing in ways that are constructed by convention. The principal challenge to economic policy today, they argue, is to reconcile internally coherent conventions with the external tests of product and financial markets, which tend increasingly to escape jurisdictional borders. There is no single model of growth and efficiency that brings these two sides together around the world today, even in narrowly defined product markets. If policies are to deal effectively with an increasingly unified global system of flows of commodities, money, and people, they must be aware of the diverse, economically viable action frameworks found in different industries, regions, and nations.