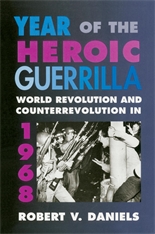 Year of the Heroic Guerrilla

World Revolution and Counterrevolution in 1968

From Paris to Peking, from Saigon to Washington, the pillars of the postwar world tottered on the brink of collapse in 1968. Year of the Heroic Guerrilla is the first global analysis of that universal upheaval.

Robert Daniels vividly depicts the great crises of that era: the Tet offensive and the abdication of Lyndon Johnson; the denouncement of the counterculture; the fissuring of the civil rights movement and the assassination of Martin Luther King, Jr.; the student revolt at Columbia University; the May uprising in France that nearly overthrew the Fifth Republic; the “cultural revolution” in China; the chilling of the Prague Spring by the Soviet army; and, finally, the convention and riots in Mayor Daley’s Chicago, signaling the downturn of the revolutionary spirit in America.