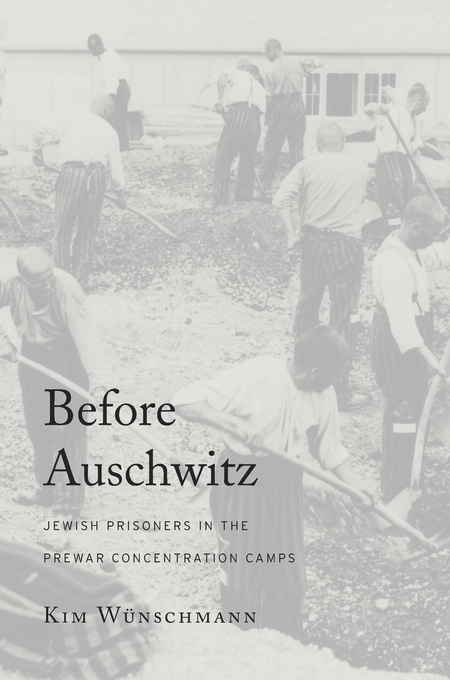 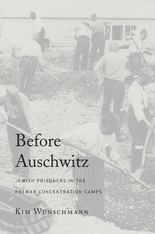 “Based on a vast body of archival materials, including SS reports, newspaper articles, prisoner letters and post-war memoirs, Before Auschwitz is a remarkable, humane, thought-provoking book.”—David Motadel, Times Literary Supplement

“Wünschmann’s fine study argues persuasively that the main purpose of incarcerating German Jews prior to 1939 was to intimidate them into emigration… This is an assiduously researched, rigorously considered and carefully argued book. It combines this rigor with a thoroughly humane perspective on the experiences of the victims, whose sense of horror at early murders and outrage at the denial of their own often deeply felt German identity is captured in Wünschmann’s sensitive treatment of sometimes quite difficult material… Indeed, her vivid discussion of the experiences of a wide variety of individuals serves as an uncomfortable reminder of just how prone historians still are to reproducing the homogenising, dehumanising category of ‘the Jews’ when discussing the Holocaust. Not least for this reason, Wünschmann’s book is to be highly commended.”—Neil Gregor, Times Higher Education

“[Wünschmann’s] prize-winning study offers an original, thorough analysis of the Jewish prisoners in prewar camps, which remain a difficult topic because of their relative obscurity, overshadowed by the camps that served mass murder in the 1940s. In comparison, the early camps were small, holding only hundreds of prisoners. The prewar camps have been the topic of an array of recent, often regional scholarship, which tends to be descriptive and hard to digest. To her credit, Wünschmann synthesizes an impressive array of this scholarship and demonstrates formidable archival mastery… Wünschmann’s careful research and eye for detail offers a wealth of original contributions to existing fields of research, including suicide, homosexuality, prisoner functionaries, constructions of criminality, and the function of concentration camps in Nazi Germany. The book will be a welcome addition to the reading list for those teaching modern Jewish or Holocaust history.”—Anna Hájková, AJS Review

“Kim Wünschmann has made an extraordinary contribution to our understanding of German history and Jewish history in the interwar period through her meticulously detailed and penetrating study of Jewish prisoners in Nazi concentration camps before the outbreak of the Second World War… This book should be of particular interest to criminologists, as the phenomena described and analyzed here reveal the degree to which discourses, laws and institutions were modified and created not as a response to lawbreaking in any conventional sense—but as a way to promote discrimination and racism, and especially as a means to persecute citizens deemed enemies of the state, in this case, Jews… A supremely well-argued and important study.”—Michael Berkowitz, British Journal of Criminology

“Before Auschwitz is the first comprehensive monograph on the prewar fate of the roughly 40,000 Jewish men and women incarcerated in Nazi concentration camps. Clearly structured, well written, and solidly grounded in both primary sources and an extensive secondary literature, Kim Wünschmann’s study provides crucial insights into the ways in which the evolution of concentration camps intersected with the regime’s prewar Judenpolitik and what that meant for Jewish prisoners… This study marks a major advance in the existing Holocaust literature.”—Jürgen Matthäus, Holocaust and Genocide Studies

“With its discriminating integration of racial, gender, and political dimensions, this book is a valuable exemplar of the new, counterteleological history of the pre-war concentration camps.”—Jane Caplan, Journal of Interdisciplinary History

“Will prove to be the definitive work on the topic, with wider implications for the history of the Nazi regime. It ranges seamlessly from careful statistical analysis of entire groups to portraits of individuals; without the use of emotional or hyperbolic language, her writing lends immediacy to the horror of the experience. The author is to be congratulated on having produced a well-composed, readable text.”—Alan Kramer, Journal of Modern History

“Wünschmann’s book sheds light on an issue that Holocaust research has largely overlooked—the history of Jewish prisoners in the concentration camps in Germany from the Nazi accession to the beginning of the war… Before Auschwitz takes up the history of Jewish prisoners in the Nazi concentration camps in 1933–1939, as a topic worthy of discussion on its own merits, and not only as a prologue to the annals of the camps during the war and the Holocaust.”—Guy Miron, Yad Vashem Studies

“This book is a thorough exploration of the relationship between the prewar Nazi German concentration camps and the Jews who were imprisoned in them between 1933 and 1939. Wünschmann has harvested significant data from a large variety of archival sources, as well as survivor testimonies and postwar trial records. She details how the concentration camps served to reinforce and shape the Nazi German regime in its first years, and how they began to show rudimentary patterns that blossomed poisonously after 1939.”—R. M. Shapiro, Choice

“An impressive, well-written study of a little-known chapter in the persecution of the Jews in Nazi Germany. Wünschmann has carried out prodigious archival research, unearthing all kinds of interesting and troubling material, particularly on the fate of Jewish citizens who were sent to the camps without trial and held without rights in what the police euphemistically called ‘protective custody.’ Her book will certainly find a wide readership.”—Robert Gellately, author of Stalin’s Curse: Battling for Communism in War and Cold War

“Wünschmann presents a skillfully narrated, analytically rigorous, tightly argued look at the prewar camp system and, more importantly, its immediate impact on the fate of German Jewry. She convincingly asserts that in the formative phase of the evolving system of terror, actions directed against Jews were of central importance to a regime then testing the limits of its expanding power while seeking maximum influence over the hearts and minds of the German public as a whole. Wünschmann persuasively argues that a fresh examination of this early phase in the history of the concentration camps can tell us much about how, feeling its way, yet possessed of an unwavering sense of its mission to root out internal enemies and enact institutional violence, the regime was gaining both experience and strength for even greater transgressions to come.”—Gordon Horwitz, author of Ghettostadt: Łódź and the Making of a Nazi City