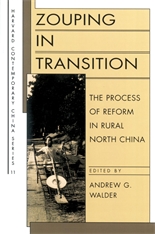 The Process of Reform in Rural North China

Zouping offers important general lessons for the study of China’s rural transformation. The authors in this volume, all participants in a unique field research project undertaken from 1988 to 1992, address questions that are far from simple and about which there is some controversy.

The questions are grouped around two issues. The first is the role of local governments as economic actors. What is this role, how have they played it, and how can we explain their behavior? Have they dominated rural economies through public ownership of industry and local planning, or has the role of local governments diminished with the rise of market transactions and private ownership? The second issue is market reform and inequality. Have rural cadres enjoyed income advantages in the new market environment? Has the provision of such collective services as education and health care declined, leading to new forms of inequality?