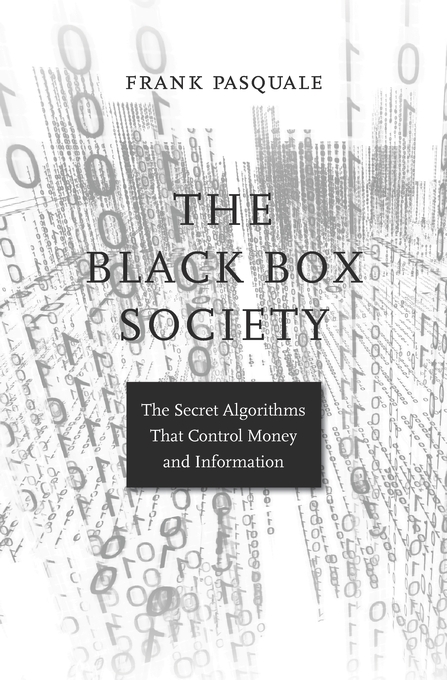 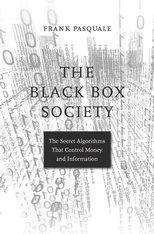 The Secret Algorithms That Control Money and Information

“Recognized internationally as a landmark work of law and political economy.”—Lawrence Joseph, Commonweal

“If you are a person in America, then there are equations trying to learn more about you… Some of these equations work for private companies and some of them work for the government, but they all generate correlations based on your behavior… Frank Pasquale’s new book The Black Box Society is a tour of how computational intelligence has come to dominate three important parts of American life: reputation, search, and finance.”—Malcolm Harris, The New Republic

“Pasquale has emerged as one of the go-to thinkers on Big Data and the algorithmic economy, and The Black Box Society (along with his Twitter feed) is a great—if discomfiting—place to start. You’ll come away overwhelmed by the speed and recklessness of data compilation and its uses and abuses.”—Jonathon Sturgeon, Flavorwire [12/04/15]

“Frank Pasquale’s notable new book, The Black Box Society, tries to come to grips with the dangers of ‘runaway data’ and ‘black box algorithms’ more comprehensively than any other book to date… It’s an important read for anyone who is interested in the hidden pitfalls of ‘big data’ and who wants to understand just how quantified our lives have become without our knowledge.”—David Auerbach, Slate

“The Black Box Society offers a good dose of fresh thinking and may advance our debates over privacy. It also helps greatly that it is a good read, not just for those who are curious about privacy but also for those who are already familiar with the privacy literature.”—Viktor Mayer-Schönberger, Science

“Everyone who uses the Internet for entertainment, education, news or commerce is implicated in a web of data collection whose breadth surpasses ordinary awareness… As [Pasquale’s] exposé…shows, this is a society in which basic functions are performed in deliberate obscurity through the collection and algorithmic manipulation of personal data… In The Black Box Society, Pasquale finds reason to believe that even some of the most secretive and unresponsive institutions can be held to account. Elucidating the problem is a first step.”—Steven Aftergood, Nature

“The algorithmic control that law scholar Frank Pasquale eloquently and intelligently details and analyzes goes beyond money information and into almost every aspect of our lives. For this reason, although it might appear merely to be a book about technology and finance, The Black Box Society, ultimately, is a radical and political work that deserves wide attention… The Black Box Society includes, for example, a fine explanation of the way that corporate and government surveillance work in concert and why we should be concerned about both… [Pasquale’s] brutal on the subject of the NSA, but devastating in his critique of Facebook, Twitter and Google and the myths that continue to surround them: myths of neutrality, myth about the ephemeral nature of their power and more. His analysis of search is pointed and poignant, underlining that we need to understand it better and treat search results more critically and sceptically… Pasquale’s detailed analyses, and his recipes not just for transparency but also for accountability, for more rigour in regulation and harder-hitting enforcement, deserve a careful read—and then action.”—Paul Bernal, Times Higher Education

“The Black Box Society is a frightening portrait of the ever more powerful shadowy world that blocks light from reaching our everyday lives. It is also a call to action, with a range of suggestions that inevitably pale in comparison to the gargantuan task at hand. But small steps sometimes have outsize consequences. Just ask the folks who control what we see, influence what we buy, and determine whether we can pay for it.”—Brenda Jubin, Reading the Markets

“By carefully breaking down ‘the business practices of leading Internet and finance companies, focusing on their use of proprietary reputation, search, and finance technologies,’ Pasquale pulls off an amazing feat of explanation, simultaneously and seamlessly explaining how and why black boxes exist, as well as what they can control and what happens when society entrusts black box technology with consequential decisions and hands immense power to the black box firms of Silicon Valley and Wall Street… The Black Box Society is a first-rate work of synthesis, combining ideas from law and economics, interpretive social science, science studies, and the philosophy of technology into an essential study of the political economy of information.”—Thomas Drueke, Law Library Journal

“This book by Pasquale is disturbing. The premise is that corporate and public unchecked use of computer algorithms to collect and analyze data harms the public… Pasquale calls out Google, Facebook, and the financial industry for unchecked use of data to make profits and broken promises of privacy protection.”—Library Journal

“An exhilarating read, brimming with passion. Pasquale’s bold and ambitious book lifts the lid on the ‘black box society’ by tackling a wide array of issues, from secrecy in finance to credit scoring, from search engines to automated decision-making, from institutional transparency to the relationship between government and big corporations. Writing with urgency and utter conviction, he paints a compelling—and devastating—picture of the world that we are building.”—Daniel J. Solove, author of Nothing to Hide: The False Tradeoff between Privacy and Security

“A timely and important book about the algorithmic processes that play such central roles in our emerging information society. Pasquale explores the abuses that have resulted from insufficient transparency and exposes the inability of either markets or regulators to instill appropriate levels of accountability. He is not a reflexive technology-basher, however, but instead offers judicious reform proposals.”—Julie E. Cohen, author of Configuring the Networked Self: Law, Code, and the Play of Everyday Practice