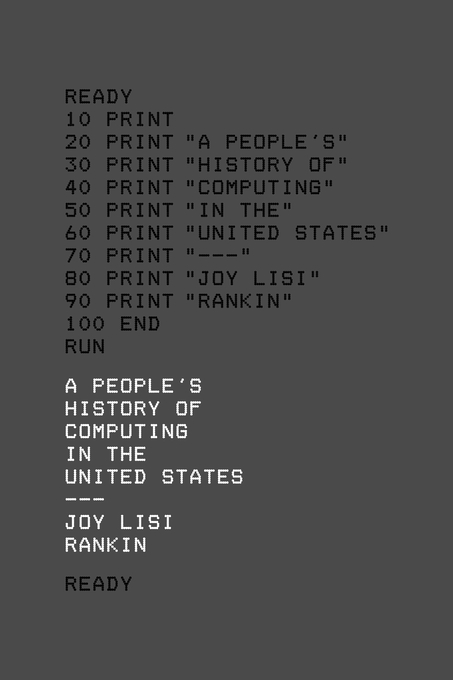 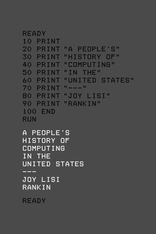 A People’s History of Computing in the United States

“A powerful and densely detailed account of how digital culture in the 1960s and ’70s shaped our contemporary experiences of technology as a tool for social connection… As Rankin’s analysis shows, racism and misogyny played a part in molding digital culture from its inception.”—The Nation

“Compellingly recasts people’s computing as one of networked belonging, intimacy, and coterie. In doing so, Rankin restores a crucial forgotten 10-year period between mainframe and personal computing, chronicling a history of networked belonging and user culture well before Jobs and the Woz rolled out Apple I… Rankin’s book is interested in how students and their teachers worked at the margins to elaborate varying notions of computer citizenship… She deepens the account of computing in all its problems.”—Hannah Zeavin, The Los Angeles Review of Books

“Provides enough evidence to bury the Silicon Valley Myth… Rankin’s study is a major revision of our understanding of the history of computing as well as our assumptions about the relationship between the general public and technological development. The book is also a delight to read.”—Josh Specht, Australian Book Review

“Obviously inspired by Howard Zinn’s A People’s History of the United States, Joy Lisi Rankin’s book positions itself as a corrective to what she calls ‘Silicon Valley mythology.’”—Marta Figlerowicz, Public Books

“Highly recommended… Rankin’s study offers insight into some of the unsung pioneers of personal computing—namely, the teachers and students who were using computers to program poems, build games, exchange messages, and build online communities back in the 1960s to 1970s… A fascinating historical account of early experiments in online learning and edtech.”—Cait Etherington, ElearningInside News

“Digital computers were brought to us by their inventors, a story frequently told. The digital revolution, in contrast, was brought to us by computer users, and that story—as vividly narrated by Joy Rankin in A People’s History of Computing in the United States—deserves to be better known.”—George Dyson, author of Turing’s Cathedral: The Origins of the Digital Universe

“We’re familiar with the story of an American computing culture created by great men—geniuses and mavericks. Very rarely have we heard about exceptional women who made significant contributions to hardware and software development. A People’s History of Computing in the United States subverts that old story and takes us into the homes, classrooms, and offices of ordinary Americans—girls and boys, women and men—who built an extraordinary, vibrant digital culture long before the arrival of the PC in the 1980s. The girls (and boys) who code today are the successors to the democratic computing culture that once thrived in this country.”—Reshma Saujani, founder of Girls Who Code

“If you’re interested in computing’s present, then this is one of the books you need to read about its past… Kudos to Joy Rankin on this timely, relevant new release.”—Marie Hicks, author of Programmed Inequality