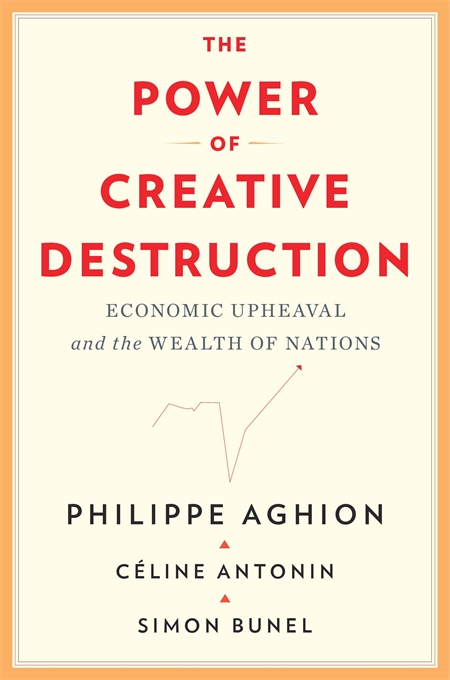 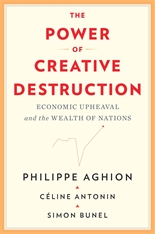 The Power of Creative Destruction

Economic Upheaval and the Wealth of Nations

“Sweeping, authoritative and—for the times—strikingly upbeat… The overall argument is compelling and, with creative destruction falling out of political favor, it carries a trace of Schumpeterian subversion.”—The Economist

“[An] important book… [It] is lucid, empirically grounded, wide-ranging, and well-argued… Schumpeter himself feared capitalism would perish. So far, he seems to have been wrong. Another possibility is that democracy will die, as plutocracy allies with demagoguery. Either way, the civilizations of the contemporary high-income democracies would perish. By promoting a better understanding, this book could, with wisdom and luck, help us avoid that fate.”—Martin Wolf, Financial Times

“Successfully navigating the supply chain disruptions created by COVID-19 requires strong political leaders to implement smart policies, but not leaders so strong that they can suppress organizational innovations that will disfavor them or their allies. The authors explain these dynamics and more in an eminently accessible fashion.”—Barry Eichengreen, Foreign Affairs

“Marvelous… Consistently thoughtful and, in its way, fearless. In The Power of Creative Destruction, readers will find much that transcends the facile arguments and moral posturing that too often characterizes today’s economic debates.”—Milton Ezrati, City Journal

“The authors…argue that the socioeconomic problems revealed during the global pandemic—welfare, health, inequality, and many others—will not be fixed by abolishing capitalism but rather by inventing a better capitalism through the power of creative destruction, which they define as innovations that disrupt and lift societies.”—Satya Nadella, Fast Company

“Offers Americans much needed insight into the sources of economic growth and the kinds of policies that will promote it… All in Washington would do well to read this volume carefully.”—Milton Ezrati, Forbes

“An important book for the times… The authors succinctly connect politics to economics and argue that ‘Innovation Needs Democracy.’ …To paraphrase a quote referring to Keynes, another famous economist, this book may convince readers that we should all be Schumpeterians now.”—Craig R. Roach, New York Journal of Books

“[A] rigorous education in the economics of innovation… Extend[s] economic analysis to illuminate a wide range of contemporary political and cultural issues.”—William H. Janeway, Project Syndicate

“A refreshing take on large, important societal questions. By making the case for a rightful role for government, institutions, civil society organizations, and issues of equity and fairness in the production of capitalist society, the authors produce a justification for a new political economy—one in which capitalism’s innovative power to produce novel, entertaining, and imaginative products is harnessed to increasing collective welfare and a more interesting and secure future for citizenry.”—Neil Fligstein, Administrative Science Quarterly

“Gather a group of economists together and ask what most concerns them, and a wide variety of topics would soon emerge… Decade after decade, numerous books have been written about each of these issues. But here we have in one compact package a blockbuster book that deals with all of them… A magisterial book with something new and imaginative to say on such a wide and important range of topics.”—Robert J. Gordon, Business History Review

“An impressive study… It convinces, to my mind, on what the path to a better world, with less inequality, injustice, environmental catastrophe might look like.”—Bridget Rosewell, Society of Professional Economists

“Philippe Aghion is one of the founders of the new growth theory focused on the origins and implications of technological progress. This book, based on thirty years of research, shows the richness and usefulness of this approach. It is a fundamental document for thinking about the nature of growth, industrial policy, and the organization of the labor market.”—Olivier Blanchard, Peterson Institute for International Economics and former Chief Economist, International Monetary Fund

“Accelerating technological change, global warming, pandemics, individual and national stagnation, over-indebtedness: this century decidedly provokes anxiety. Armed with legitimate concerns, anti-globalization protestors and neo-Luddites look inwards and denigrate innovation. The Power of Creative Destruction offers another vision, more persuasive and based on the innovation that creates wealth and jobs. Philippe Aghion, Céline Antonin, and Simon Bunel dismantle contemporary myths about such economic phenomena as secular stagnation and the impact of automation on employment. They show the need for competition and the fight against rents. They advocate a regulated capitalism that will allow us to keep society prosperous and the planet green. They explain, in short, how to manage the creative destruction that over the past two centuries has brought to our society a previously unimaginable prosperity. Provocative and rigorous, this book is an important milestone in our reflections on the future of our societies. A must-read.”—Jean Tirole, Nobel Laureate, Toulouse School of Economics

“The term ‘creative destruction’ expresses a contradiction at the core of capitalism; creation brings innovation, growth, and prosperity while the destruction that it demands engenders resistance and stagnation. Philippe Aghion, Céline Antonin, and Simon Bunel are the leaders in exploring and understanding this story of action and reaction. Their insights are essential if policy is to restore growth in today’s faltering capitalism.”—Angus Deaton, Nobel Laureate in Economic Sciences

“Anyone curious about where modern capitalism is going and whether economic growth can be sustained should read this book. In accessible prose, based on cutting-edge economic analysis, the authors dissect the dynamics of the modern economies. They show brilliantly how capitalism in the twenty-first century is indeed as creative as it is destructive, and how innovation will affect modern economies and hence the life of every human on the planet, for better and for worse. Deeply researched and intelligently written, this is a genuine tour de force.”—Joel Mokyr, Northwestern University

“Philippe Aghion has been the leader of modern growth theory for the last three decades. He has shown that innovation and disruption, Schumpeter’s creative destruction, are at the heart of the productivity and power of a capitalist economy. In this book that story is clearly and compellingly told, but now he and his colleagues go still deeper into the kind of society we want to build, whilst keeping the power of creative destruction. We really can create a prosperous future which brings a supportive community and social cohesion, and a much better environment, climate, and biodiversity. This fine and crucially important book is ultimately optimistic about what we can do, but challenges us as to whether we will.”—Nicholas Stern, London School of Economics