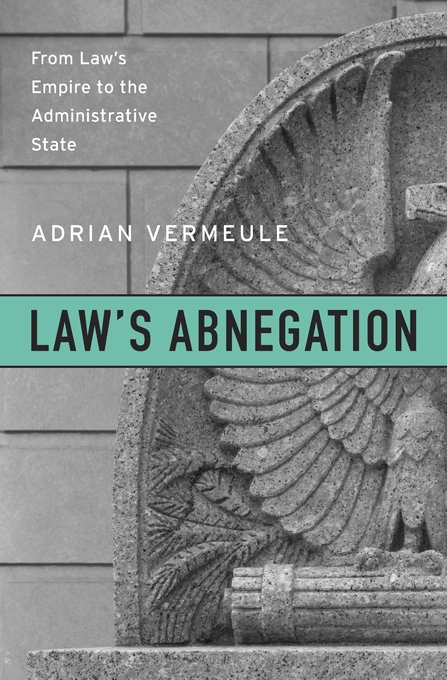 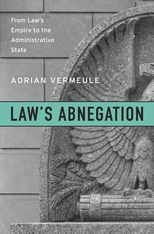 From Law’s Empire to the Administrative State

“Law’s Abnegation is a theoretically informed, analytically rigorous, and, above all, lawyerly interpretation of the law of the modern administrative state. But it is much more than that. Vermeule also brilliantly deconstructs confused and myopic alternative accounts and, most importantly, demonstrates how legal doctrine really works from an internal perspective. Built on the foundation of cases familiar to most administrative lawyers, his analysis is nevertheless revelatory concerning the field’s core commitments, why those commitments make sense, and how they cohere across a wide range of seemingly disparate topics.”—Jerry L. Mashaw, Yale Law School

“In this powerfully argued book, Vermeule shows that the administrative state, far from being ‘lawless,’ developed in accordance with the internal logic of the U.S. Constitution, and that by ‘working the law pure’ judges appropriately relegate themselves to the margins of the legal order. Both critics and supporters of the administrative state will learn much from his careful, imaginative, and non-polemical analysis.”—David Dyzenhaus, University of Toronto Faculty of Law

“Vermeule’s knowledgeable and unapologetic account of the theoretical foundations of judicial deference to administrative agencies will unsettle those who think of Congress and the courts as the dominant institutions in our legal system. But even skeptics will have to reckon with the breadth of his erudition and the rigor and forcefulness of the arguments in this impressive book.”—Ronald M. Levin, Washington University School of Law

“With sophisticated but understated decision theory, political economy, legal philosophy, political science, and economics covertly lurking in the background, Vermeule relies heavily on traditional legal materials to demonstrate, convincingly, that the administrative state has grown to irreversible proportions with little constraint from the legal system. This book is essential reading not only for lawyers, but also for anyone who wishes to understand contemporary governance.”—Frederick Schauer, author of The Force of Law