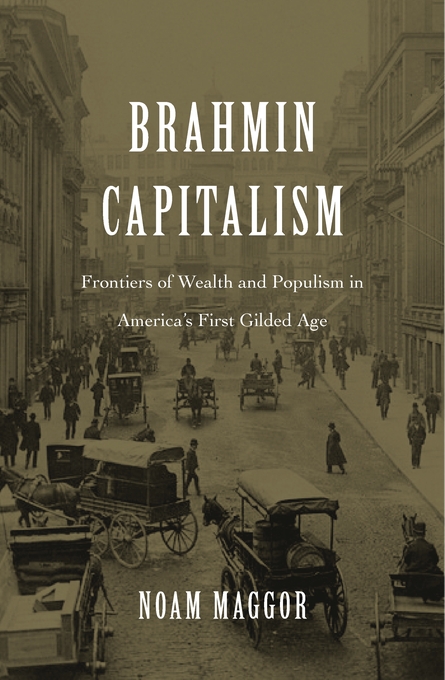 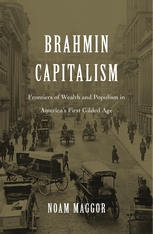 Frontiers of Wealth and Populism in America’s First Gilded Age

“Maggor has produced a complex, fascinating account that is rich in local detail yet asks some very large questions… Brahmin Capitalism is an important contribution to the growing literature on the history of capitalism in the United States… Maggor’s book offers us an important reminder of the broad impact of capitalist development and the bitter conflicts it engendered. With its vast inequalities of wealth and power, business dominance of the national government, and nationwide debates over taxation, spending, and economic regulation, the era that Mark Twain dubbed the ‘Gilded Age’ bears more than a passing resemblance to our own.”—Eric Foner, The Nation

“Far from being a conservative, inward-looking sort who settled into soft decline, the Brahmins crisscrossed the continent and took bold risks in search of higher yields than New England’s manufacturing businesses could provide. In the process, they turned Boston into an interconnected financial hub that supplied the capital that the growing West needed for development. They also remade the economy of the United States, turning it from a largely agricultural exporter into the greatest industrial country in the world, out-producing Britain, France and Germany combined… [Maggor’s] research is used to present an informative chronicle and to advance a few novel, and often persuasive, hypotheses, among them the notion that America’s Gilded Age isn’t as uniquely American as many would think.”—John Steele Gordon, The Wall Street Journal

“By uncovering the crucial role of eastern finance capital in underwriting western industries, Maggor demonstrates that two central features of the post–Civil War United States—continental expansion and economic industrialization—developed together… Skyrocketing economic inequality, the conflation of private wealth with political power, and the removal of economic questions from the realm of political debate: these are problems of the Gilded Age, and of our own time. As Brahmin Capitalism demonstrates, they are not excesses of an era, but products of the political order that emerged from late nineteenth-century battles over wealth distribution in industrializing America.”—Allison Powers Useche, Dissent

“A smart and fresh study, a book that respects the propulsive force of economic dynamics but aims to see them profoundly influenced by complex contexts… We can applaud this book. Brahmin Capitalism foregrounds arresting episodes and figures in a pivotal moment of American economic development, and thus illuminates the comparatively underreported part played by Boston’s wealth and leadership.”—Jonathan Prude, New England Quarterly

“Given that a key goal of the ‘history of capitalism’ has been to challenge the naturalization of markets (with its propensity for ahistoricity) within a variety of fields, Brahmin Capitalism is a worthy contribution through its illumination of debates over taxation, city services, articulations of public and private, craftsmanship and art, and defining sources of value and profit… In tackling the historiographical question of the compatibility of capitalism and democracy, Brahmin Capitalism points to a history of demands not to reject capitalism, but for a more democratically-infused market society and, conversely, political institutions cognizant of the asymmetries inherent in markets.”—Rachel Tamar Van, Journal of Social History

“After the Civil War, heirs to the great New England fortunes aggressively shaped the political economies and institutions of their own states and those of the Western territories. Maggor overturns stereotypes of Boston elites as insulated and shows that Brahmin capitalists engaged in the rough and tumble of western expansion. In search of profitable investments, eastern capitalists helped forge the American West.”—P. W. Laird, Choice

“Brahmin Capitalism is a rich and truly original history of industrial capitalism that ties Boston to the trans-Mississippi West. Maggor follows Brahmin money as it came up against democratic constituencies that had alternative visions of how the American political economy should be organized and governed. He offers a penetrating and bracing analysis of the spatial dynamics of capital accumulation and the political forces that have restrained it. This is a remarkable book.”—Elizabeth Blackmar, Columbia University

“There is no better account of the human drama of capital mobility than Maggor’s brilliant book. He has brought a new level of sophistication to the history of capitalism. It is essential reading for anyone interested in the conflict between democratic government and global capitalist development—that is, in the origins of our time.”—Jonathan Levy, author of Freaks of Fortune