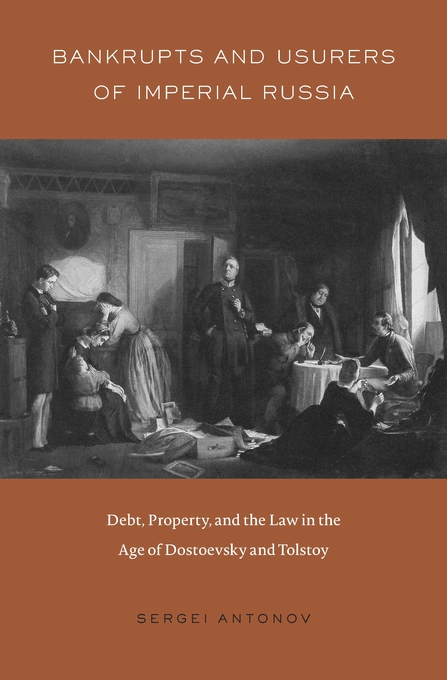 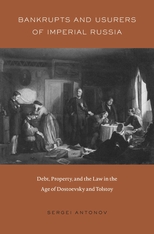 Bankrupts and Usurers of Imperial Russia

Debt, Property, and the Law in the Age of Dostoevsky and Tolstoy

“Sergei Antonov introduces us to an imperial Russia in which aristocratic sons borrowed from usurers for their military uniforms and gambling debts and landowners borrowed money from serfs they owned and had mortgaged as collateral for other loans. With imagination and rich detail, he shows how informal personal credit pervaded every aspect of culture, society, and government, undergirding the social order and an entire regime of private property ownership. Bankrupts and Usurers of Imperial Russia is a masterly addition to the new cultural and social history of debt.”—Bruce H. Mann, author of Republic of Debtors: Bankruptcy in the Age of American Independence

“Antonov is a pioneer in the use of sources about private moneylending as a lens onto the tsarist social order. He is a keen analyst of large-scale processes, but the book is also highly readable and brings everyday imperial Russia to life. Bankrupts and Usurers of Imperial Russia is an important scholarly intervention, one built on archival sleuthing, expertise in social and legal history, a skillful integration of Russian developments into a global context, and a solid familiarity with the Western, imperial Russian, Soviet, and post-Soviet Russian literature.”—Alexander M. Martin, author of Enlightened Metropolis: Constructing Imperial Moscow, 1762–1855

“From humble peasants to wealthy aristocrats, Russian pre-revolutionary society was permeated by the bonds of debt. Antonov’s meticulously researched and beautifully written book uncovers the circuits of unofficial credit relations that existed outside of the state banking system. It tells the stories of tragic bankruptcies and prodigious fortunes, family strife, legal battles, and reconciliations between debtors and usurers. This is an important study that fundamentally recasts our understanding of the legal regimes, economy, and sociability of credit in imperial Russia.”—Ekaterina Pravilova, author of A Public Empire: Property and the Quest for the Common Good in Imperial Russia