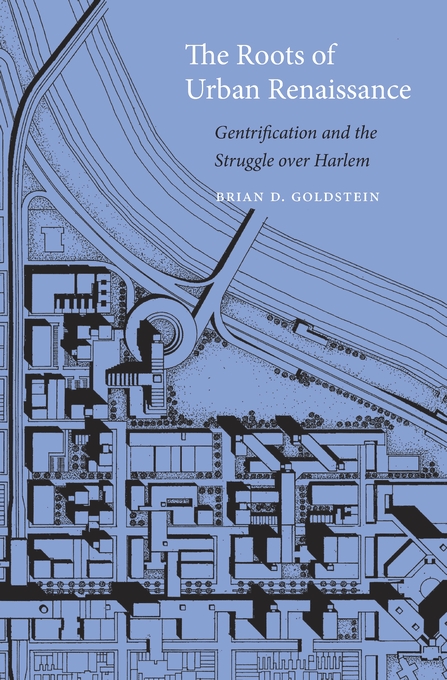 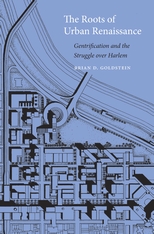 The Roots of Urban Renaissance

Gentrification and the Struggle over Harlem

“[A] meticulously researched account of Harlemites’ efforts to exercise control over their area since the urban crisis of the 1960s… Full of telling details. [This] is not a popular history but a work of rigorous scholarship.”—Benjamin George Friedman, The Times Literary Supplement

“The Roots of Urban Renaissance is a social and political history of the built environment. In it, Goldstein tells the story of Harlem’s gentrification from the inside out: rather than chronicle the experiences of migrants to the neighborhood, he recovers the points of view of the people who were already there… [It] is a pleasure to read and a major contribution to urban studies, to the history of the black freedom struggle, and to twentieth-century American social and political history writ large.”—Tracy Neumann, American Historical Review

“The most fascinating question posed again and again by Harlem residents, and echoed throughout Goldstein’s book, is what the streets of Harlem should look like, who should design them, and who gets to inhabit them… His point, essentially, is to debunk the idea that the gentrification of Harlem was solely imposed by outside developers and investors… Goldstein illustrates well how Harlemites not only asked, but thoroughly engaged. Although the results were mixed, it’s impossible to deny how the neighborhood was radically shaped by the opinions, persistence, and ingenuity of the people who actually lived there.”—Emily Nonko, Architects Newspaper

“Intensely detailed, this important historical analysis reads not like a play-by-play account but rather like a drama, due to the author’s strong sense of narrative. The story is deeply relevant today as the processes of gentrification and the resistance to those processes continue to produce and reproduce urban spaces across the U.S. and throughout New York City, including Harlem. Goldstein investigates how structures of racism, paternalism, and the creative destruction wrought by capitalism intersect in this iconic ‘underserved’ neighborhood, and how residents fought—and fight—to retain a degree of autonomy. The author skillfully links events in Harlem to the broader black power and civil rights movements, and to shifting political regimes. This volume covers a considerable span, from the early 1960s during the heyday of blanket ‘urban revitalization,’ which threatened to clear swaths of ‘urban blight,’ to the late 1990s.”—A. B. Audant, Choice

“We’ve waited far too long for a book like Goldstein’s. We see, through his efforts, how debates over community control, modernist and insurgent architecture, and public/private partnerships owe much of their ongoing salience to the experience of redevelopment in Harlem. Indeed, if the Harlem Renaissance of the 1920s captures a distinctive cultural flowering, the Harlem of the 1960s and 1970s, in Goldstein’s able hands, similarly stands in for America.”—N. D. B. Connolly, author of A World More Concrete

“Goldstein shows us how the neighborhood that nurtured Malcolm X also gave birth to one of the first community development corporations in the U.S., helping readers to understand the multifarious and shifting forces—from self-determination and radical democratization, to privatization and gentrification—that ultimately created the Harlem we know today. By knowing Harlem, Goldstein demonstrates, we can better understand the complex histories of the inner city in the last decades of the twentieth century.”—Dianne Harris, author of Little White Houses

“A fascinating book that will make a major impact on our understanding of Harlem and the life of the American city. The Roots of Urban Renaissance is a must-read for those interested in urban design and politics, the civil rights movement, and African American history.”—Suleiman Osman, author of The Invention of Brownstone Brooklyn

“The metamorphosis of Harlem since the mid twentieth century has been remarkable. A symbol of urban crisis and a black power utopia, it was reshaped by both advocates of community participation and by the forces of global capitalism. With attention to the ironies of urban renewal, community control, black power, and privatization, Goldstein takes us on a surprising, unpredictable and revelatory tour of one of America’s most famous neighborhoods.”—Thomas J. Sugrue, author of The Origins of the Urban Crisis