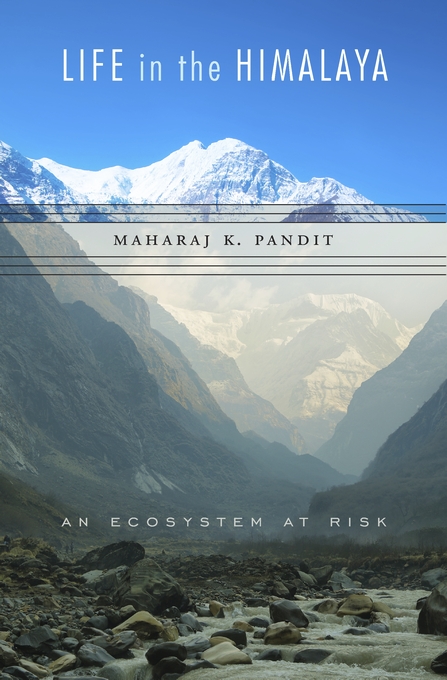 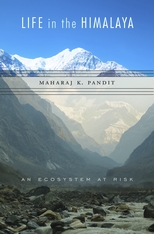 Life in the Himalaya

An Ecosystem at Risk

The collision of the Indian and Eurasian plates around fifty million years ago profoundly altered earth’s geography and regional climates. The rise of the Himalaya led to intensification of the monsoon, the birth of massive glaciers and turbulent rivers, and an efflorescence of ecosystems along the most extreme elevational gradient on Earth. When the Ice Age ended, humans became part of this mix, and today nearly one quarter of the world’s population inhabits its river basins, from Afghanistan to Myanmar. Life in the Himalaya examines the region’s geophysical and biological systems and explores the past and future of human sustainability in the mountain’s shadow.

Maharaj Pandit divides the Himalaya’s history into four phases. During the first, the mountain and its ecosystems formed. In the second, humans altered the landscape, beginning with nomadic pastoralism, continuing to commercial deforestation, and culminating in pockets of resistance to forest exploitation. The third phase saw a human population explosion, accompanied by road and dam building and other large-scale infrastructure that degraded ecosystems and caused species extinctions. Pandit outlines a future networking phase which holds the promise of sustainable living within the mountain’s carrying capacity.

Today, the Himalaya is threatened by recurrent natural disasters and is at risk of catastrophic loss of life. If humans are to have a sustainable future there, Pandit argues, they will need to better understand the region’s geological vulnerability, ecological fragility, and sociocultural sensitivity. Life in the Himalaya outlines the mountain’s past in order to map a way forward.