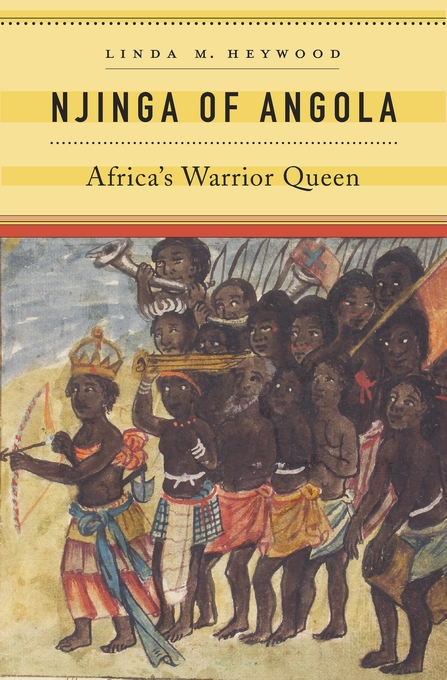 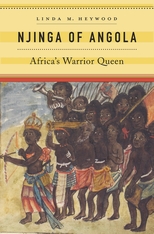 “Heywood has written a complete and focused account of Queen Njinga… Njinga of Angola seamlessly knits together the complete set of sources on the Queen, which include missionary accounts, letters, colonial records, previous histories of Angola and Dutch West India Company records… Heywood has cleared away the noise of [the] mostly fantastical accounts and assembled as straight a biography as is possible. Indeed, Njinga of Angola, which took nine years of research, sets out to replace interpretation and sensationalism with facts… Heywood preserves all of the complexity of Njinga and her politics in a book that provides the most complete and foundational history of Queen Njinga.”—Delinda J. Collier, The Times Literary Supplement

“Maintaining independence in the face of colonial encroachment, the seventeenth-century African queen Njinga fascinated Europeans… This fine biography attempts to reconcile her political acumen with the human sacrifices, infanticide, and slave trading by which she consolidated and projected power.”—The New Yorker

“In her biography of this fascinating character, Linda Heywood seeks to blow away the smoke of infamy and adulation. She reveals a figure no less protean in life than her reputation has proved to be in the three and a half centuries since her death—an individual who overstepped boundaries of religion, gender and nationhood… Like its subject, Heywood’s book defies simple categorization, mixing anthropology, gender studies and history… This stimulating biography of a queen and resistance leader offers a timely reminder that gender fluidity is not something unique to the present age.”—David Gelber, Literary Review

“Heywood [has] meticulously stitched together academic sources, contemporary documents, and details passed down through oral traditions to create a fully fleshed-out portrait of Njinga and her accomplishments.”—Anne Thériault, Longreads

“Over her decades-long reign in the 17th century in central Africa, Queen Njinga was by far the most successful of African rulers in resisting Portuguese colonialism, argues Heywood. What’s more, as this detailed and engaging study with walk-on parts for Vatican plotters, Dutch traders and Brazilian slavers shows, she rivaled Elizabeth I and Catherine the Great for political nous and military prowess. Tactically pious and unhesitatingly murderous; a ‘subverter of gender norms,’ in the inevitable formulation; a national heroine in today’s Angola; a commanding figure in velvet slippers and elephant hair ripe for big-screen treatment; and surely, as our social media age puts it, one badass woman.”—Karen Shook, Times Higher Education

“[Njinga] was powerful, committed, and brilliant in her manipulation of the situations and people around her… A necessary introduction to this pivotal figure in African and world history.”—Jacob Ivey, H-Net Reviews

“Njinga’s consummate skills as charismatic ruler, warrior, and diplomat enabled her to survive and eventually triumph over her foes, securing peace and making her a potent national symbol for modern Angolans. Heywood tells a thrilling story of pitched battles mixed with truces, internecine conflicts, strategic migrations, hair-raising escapes, and deft international relations, including allying with the Dutch against Portugal… Njinga is among the best biographies of any African. It deserves a wide readership.”—T. P. Johnson, Choice

“Historically, various authors have demonized Njinga or downplayed the importance of her reign. Heywood, however, does a beautiful job of clearly depicting her subject and setting the context for her decisions. More than simply providing facts, the author humanizes Njinga, turning her into a sympathetic figure. In the end, it is clear that she is to be appreciated in both African and world history… A great book for any history buff By taking up the mantle to write such a biography, Heywood ensures that Njinga will not be forgotten.”—Sonnet Ireland, Library Journal

“Queen Njinga of Angola has long been among the many heroes whom black diasporians have used to construct a pantheon and a usable past. Linda Heywood gives us a different Njinga—one brimming with all the qualities that made her the stuff of legend but also full of all the interests and inclinations that made her human. A thorough, serious, and long overdue study of a fascinating ruler, Njinga of Angola is an essential addition to the study of the black Atlantic world.”—Ta-Nehisi Coates, author of Between the World and Me

“Heywood gives us a biography well worthy of its complex subject: an insightful portrait of the person, smoothly narrated, with an eye for telling details, and solidly historical in its thoughtful probing of the currents in the African and Portuguese worlds Njinga skillfully navigated for more than four decades. This welcome book is a good read and a great story.”—Joseph C. Miller, author of The Problem of Slavery as History

“Heywood offers a complex and layered narrative that significantly enhances our knowledge about Njinga, the memorable ruler who defied colonial power in seventeenth-century Central Africa. In addition to being a tour de force of historical analysis that will mesmerize scholars, this powerful and moving book will delight Njinga’s many admirers, for the African queen occupies a vital place both in the national identity of Angola and in the memory of people of African descent in the Americas.”—Roquinaldo Ferreira, author of Cross-Cultural Exchange in the Atlantic World